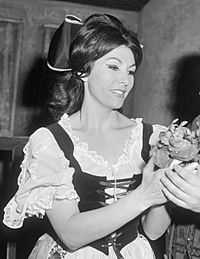 he made her La Scala debut in 1951. Other debuts were at the Salzburg Festival as Desdemona in Otello in 1952 under the direction of Wilhelm Furtwängler, San Francisco as Mimi in La bohème in 1954, the Lyric Opera of Chicago as Marguerite in Faust in 1955, the Verona Arena as Mimi in 1958, Covent Garden as Tosca in 1960, Paris Opera in 1961 as Violetta in La traviata.

All content from Kiddle encyclopedia articles (including the article images and facts) can be freely used under Attribution-ShareAlike license, unless stated otherwise. Cite this article:
Rosanna Carteri Facts for Kids. Kiddle Encyclopedia.