Rosharon ( roh-SHAIR-ən), is an unincorporated community and census-designated place (CDP) split between Brazoria County and Fort Bend County, Texas, United States, at the intersection of Farm to Market Road 521 and Farm to Market Road 1462. As of the 2010 census, it had a population of 1,152. 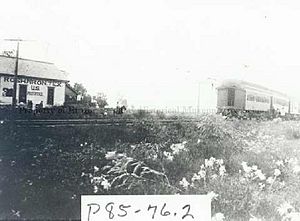 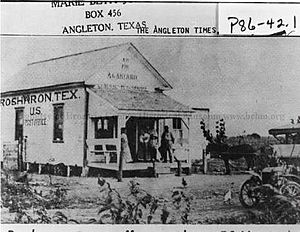 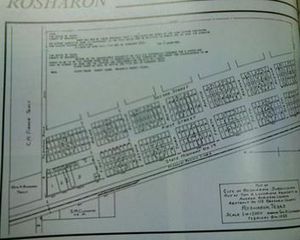 Plat of Rosharon from the BCHM, drawn by Tom Austin Lochridge

The Rosharon town site went unnamed during its early years. The area was settled by cotton and sugar plantations before the Civil War. Once the Houston Tap and Brazoria Railway (Columbia Tap) was completed in 1859, the Rosharon stop on the train line was given the name Masterson's Station, after a nearby plantation owned by Thomas G. Masterson (ca. 1813–1884). Rosharon was known locally by trainmen as "Buttermilk Station" because an early resident was known to bring a bucket of buttermilk and a dipper to the railroad station to give the engineer and crew a drink.

George Wetmore Colles, Jr. (1871–1951), an electrical and mechanical engineer educated at Yale University (BA 1892) and the Stevens Institute of Technology, bought property in the area around 1900 and called his estate the Rose of Sharon Garden Ranch after the many Cherokee Roses (Rosa laevigata) that grew there. Colles also designed the community water system.

Antonio G. Arcaro served as Rosharon's postmaster from 1912 to 1920. The Rosharon post office was discontinued in 1920 and mail was then sent to Sandy Point. The post office reopened in 1936, only to be closed again in 1979. A new post office was dedicated under President Ronald Reagan and operates today.

Tom Lochridge (1903–1985) platted the town site. Lochridge was responsible for having a cotton gin moved to Rosharon from Houston. Aside from providing employment for several persons, the gin's engine was used as Rosharon's first power plant. The community's first telephone exchange was operated out of Lochridge's home.

Rosharon's school was initially held in private home, and later in its own building. Eventually, the Rosharon school district was consolidated with the Angleton schools. Students began being bussed to Angleton in the late 1900s, a practice that continues to this day.

Church meetings were first held in a former school, then in a tavern that community members had bought and converted into a church. Eventually a brick church was constructed.

The South Texas Water Company located in Rosharon in 1935, and its fresh watercanals for irrigating rice brought some seventy-five to eighty rice farmers to the area.

By the late 1980s, Rosharon had an estimated population of 500. In 1990 the population was 435. Most residents commute to jobs in nearby towns.

In 1985 Yani Rose Keo, a Cambodian American, established a farm in an area called "Little Cambodia", in Brazoria County, near Rosharon. Terrence McCoy of the Houston Press stated that there were "perhaps" 90 families of Cambodian origin living there. In the 2000s (decade) the farmers got into a dispute with the Texas Parks and Wildlife Department (TPWD) over the farming of water spinach, which the TPWD classified as “Harmful or Potentially Harmful Exotic Fish, Shellfish and Aquatic Plants.” Ultimately the TPWD allowed the farming of water spinach. "Little Cambodia" sustained damage during Hurricane Ike in 2008, and in Hurricane Harvey in 2017.

A Schlumberger product center is located in Rosharon.

Rosharon is the current home of Skydive Spaceland Houston, a major skydiving center with a dedicated airstrip and landing area on the northeast corner of FM 521 and FM 1462.

In the neighborhoods west of Chocolate Bayou, along the north side of F.M. 1462, students attend Alvin Primary, Alvin Elementary, Fairview Junior High and Alvin High School in Alvin.

Prior to the opening of Hightower High School, Elkins High School served parts of the Rosharon area in Fort Bend County.

The Texas Legislature designated portions of Angleton ISD that by September 1, 1995 had not been annexed by Alvin Community College as in the Brazosport College zone. As Rosharon is not in the maps of Alvin CC, it is in the Brazosport College zone. There was a section of H.B. No. 2744, filed on March 6, 2007, which would have changed the boundary between Alvin CC and Brazosport CC to put Rosharon in the Alvin CC service boundary.

All content from Kiddle encyclopedia articles (including the article images and facts) can be freely used under Attribution-ShareAlike license, unless stated otherwise. Cite this article:
Rosharon, Texas Facts for Kids. Kiddle Encyclopedia.