Round Mountain, a mountain of the Snowy Range, a spur of the Great Dividing Range, is located on the Northern Tablelands in the New England region in New South Wales, Australia.

With an elevation of 1,586 metres (5,203 ft) above sea level, Round Mountain is the highest peak of the Snowy Range which forms part of the eastern escarpment of the Northern Tablelands. The mountain is located in Cathedral Rock National Park, about 72 kilometres (45 mi) east of Armidale and 63 kilometres (39 mi) west of Dorrigo, and 10 kilometres (6.2 mi) northwest of the better known Point Lookout, in New England National Park. It is located a few kilometres west of the small settlement of Ebor. The nearest sealed road is the Waterfall Way, approximately 6.5 kilometres (4.0 mi) from the mountain peak. 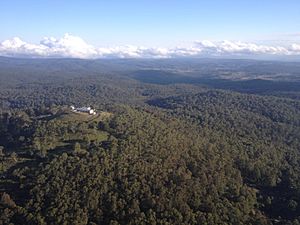 Round Mountain Radar Station, from the air

A radar air navigation station, for the control and guidance of aircraft, is located on the summit of Round Mountain.

All content from Kiddle encyclopedia articles (including the article images and facts) can be freely used under Attribution-ShareAlike license, unless stated otherwise. Cite this article:
Round Mountain (Northern Tablelands) Facts for Kids. Kiddle Encyclopedia.