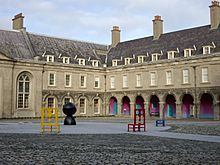 The Royal Hospital Kilmainham is a 17th-century building in Kilmainham, Dublin, Ireland. It was built to be a home for retired soldiers. It was used as a home for over 250 years.

The hospital was built between 1680 and 1684 by architect Sir William Robinson. He was the official State Surveyor General for James Butler, 1st Duke of Ormonde and Lord Lieutenant of Ireland to King Charles II. The style is based on Les Invalides in Paris. The Royal Hospital Chelsea in Chelsea, London was completed two years later and looks alike in style.

The Tudor Gothic gateway at the end of the road leading to the Royal Hospital was designed by Francis Johnston. He was one of the leading architects of the day. This gateway originally stood beside the River Liffey at Bloody Bridge (now Rory O'More Bridge). It was moved after the arrival of the railway in 1844.

When the Irish Free State was formed, they thought about using the building for the Oireachtas Éireann, the new Irish national parliament. This did not happen. After the soldiers were all gone, the buildings were used for different things like offices for the Garda Síochána (the Irish police force) and as storage for the National Museum of Ireland.

The Government of Ireland restored the buildings in different stages from 1957, and opened in 1985 as the National Centre for Culture and the Arts. In 1991 the Irish Museum of Modern Art was opened here.

Every year on the National Day of Commemoration the President of Ireland lays a wreath in the courtyard in memory of all Irishmen and Irishwomen who have died in past wars and on service with the United Nations.

All content from Kiddle encyclopedia articles (including the article images and facts) can be freely used under Attribution-ShareAlike license, unless stated otherwise. Cite this article:
Royal Hospital Kilmainham Facts for Kids. Kiddle Encyclopedia.