Ó Ceallaigh was born in Dublin on Capel Street in the north inner-city Dublin. He joined the National Library of Ireland in 1898 as a junior assistant. The same year, he joined the Gaelic League, becoming a member of the governing body in 1910 and General Secretary in 1915.

In 1905 Ó Ceallaigh joined Sinn Féin. Sinn Féin then wanted a dual-monarchy. He was an honorary secretary of the party from 1908 until 1925. In 1906 he was elected to Dublin Corporation, which was Dublin's city council. He retained the seat until 1924.

Pádraig Pearse made Ó Ceallaigh his helper when Pearse was getting ready for the Easter Rising.

After the Easter Rising in 1916, Ó Ceallaigh was put in jail, released, and put in jail again. He escaped from jail in Fairfield in the UK, and came back to Ireland.

MP in the 1918 general election

O'Kelly was elected Sinn Féin MP for College Green in the 1918 British general election. Along with other Sinn Féin MPs he refused to take his seat in the British House of Commons. Instead they set up an Irish parliament, called Dáil Éireann, in Dublin. Ó Ceallaigh wasCeann Comhairle(Chairman) of the First Dáil. He was the Irish Republic's envoy to the post-World War One peace treaty negotiations at Versailles, but the other countries refused to allow him to speak, because they did not recognise the Irish Republic

Ó Ceallaigh was a close friend of Éamon de Valera, and both he and de Valera opposed the Anglo-Irish Treaty of December 1921.

During the Irish Civil War, O'Kelly was in jail until December 1923. Afterwards he spent the next two years as a Sinn Féin envoy to the United States.

A founder of Fianna Fáil

In 1926 when de Valera left Sinn Féin to found his own republican party, Fianna Fáil, Ó Ceallaigh followed him, becoming one of the party's founding members. In 1932, when de Valera, was appointed President of the Executive Council (prime minister) of the Irish Free State he made Ó Ceallaigh Minister for Local Government. Ó Ceallaigh often tried to publicly humiliate the Governor-General of the Irish Free State, James McNeill. Stunts such as withdrawing the Irish Army's band from playing at diplomatic functions which the Governor-General attended, or in one notorious case the sight of O'Kelly and Defence Minister Frank Aiken storming out of a diplomatic function at the French Legation when McNeill, the guest of honour, arrived, damaged Ó Ceallaigh's reputation and image, particularly when the campaign backfired.

Considered for President of Ireland in 1938

In 1938, many thought that de Valera wanted to make Ó Ceallaigh the Fianna Fáil choice to become President of Ireland, under the new Irish constitution, Bunreacht na hÉireann. When Lord Mayor of Dublin, Alfie Byrne, said he wanted to be president there was an all party agreement to nominate Dubhghlas de hÍde, a Protestant Irish Senator, Irish language enthusiast and founder of the Conradh na Gaeilge. They thought de hÍde was the only person who might win an election against Alfie Byrne. Ó Ceallaigh was appointed Minister of Finance instead, and helped create Central Bank in 1942. 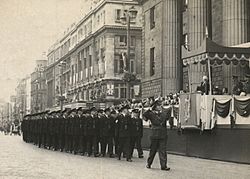 President Seán T. Ó Ceallaigh, An Tóstal, 1954.
Outside the GPO, President Ó Ceallaigh receives the salute from the new Garda recruits during the Tostal celebrations of 1954.

Ó Ceallaigh left the cabinet in 1945 when he was elected President of Ireland in a popular vote of the people, defeating two other candidates.

Ó Ceallaigh was re-elected unopposed in 1952. During his second term he visited many nations in Europe and spoke to the United States Congress in 1959. He retired at the end of his second term in 1959, to be replaced by his old friend, Éamon de Valera.

Ó Ceallaigh did not refer any Bills to the Supreme Court to see if they were legal, but he did ask his official advisors, called the Council of State, if he should refer the Health Bill, 1947 but he decided not to.

Ó Ceallaigh's strong Roman Catholic beliefs sometimes caused problems. de Valera often thought that Ó Ceallaigh either deliberately or accidentally leaked information to the Knights of Columbanus, and the Church leaders. Ó Ceallaigh ensured that his first state visit, following the creation of the Republic of Ireland in 1949, was to the Vatican to meet Pope Pius XII. Ó Ceallaigh accidentally revealed the Pope's private views on communism. This angered the Pope and Stalin. This is why he was not given the papal Order of Christ which was given to many Catholic heads of state.

When he retired as president in 1959, he was described as a model President by the normally hostile Irish Times newspaper. Though controversial, Ó Ceallaigh was widely seen as a genuine and honest, but tactless.

He died on November 23, 1966 (aged 84), fifty years after the Easter Rising that first brought him to prominence. He is buried in Glasnevin Cemetery, Dublin.

Mary Kate Ryan and Ó Ceallaigh were married from 1918 until Mary Kate's death in 1934.

In 1936 he married his second wife Phyllis, who was Mary Kate's sister. Another sister was married to Fine Gael leader General Richard Mulcahy, and a brother was Fianna Fáil minister, James Ryan. O'Kelly died in Dublin.

All content from Kiddle encyclopedia articles (including the article images and facts) can be freely used under Attribution-ShareAlike license, unless stated otherwise. Cite this article:
Séan T. O'Kelly Facts for Kids. Kiddle Encyclopedia.