SS Keewatin is a passenger liner that once sailed between Port Arthur / Fort William (now Thunder Bay) on Lake Superior and Port McNicoll on Georgian Bay (Lake Huron) in Ontario, Canada. She carried passengers between these ports for the Canadian Pacific Railway's Great Lakes steamship service. Keewatin also carried packaged freight goods for the railway at these ports.

Built by Fairfield Shipbuilding and Engineering Company in Govan, Glasgow, Scotland as Hull No. 453, Keewatin was launched 6 July 1907 and completed her maiden voyage docking at Levis, Quebec to be halved because the canals below Lake Erie, specifically the Welland Canal could not handle ships as long as Keewatin. The ship was reassembled at Buffalo., where she resumed her voyage under her own power to begin service at Owen Sound, Ontario. 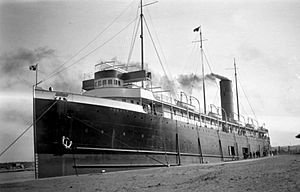 Keewatin ran continuously for almost 60 seasons, being retired in 1966. Soon after, she was acquired for historic preservation in the United States. Her sister ship, Assiniboia, was also set to be preserved as an attraction, but burned in 1971 and was scrapped.

In the last twenty years of her working life, like many passenger ships of that era on the Great Lakes, Keewatin and sister ship Assiniboia operated under stringent regulations imposed for wooden cabin steamships following the Noronic disaster in 1949. Doomed by their wooden cabins and superstructure, these overnight cruisers lasted through the decline of the passenger trade on the lakes in the post-war years. As passengers opted for more reliable and faster modes of travel, Keewatin and her sister ship were withdrawn from the passenger trade in 1965, continuing in freight–only service until September 1967. Along with South American and  Milwaukee Clipper, Keewatin was among the last of the turn-of-the-century style overnight passenger ships of the Great Lakes.

Keewatin was eventually moved to Douglas, Michigan, in 1967, where she was a museum ship across the river from the summer retreat Saugatuck, Michigan. In July 2011 Keewatin was purchased by Skyline Marine and dredged from the Kalamazoo River with a one-mile (1.6 km) long, ten-foot (3.0 m) deep, 50-foot (15 m) wide excavation and dredged channel and moved to the mouth of the river and Lake Michigan on 4 June. Keewatin, manned with a crew of ten was towed back to Canada and arrived in Port McNicoll on 23 June 2012. Keewatin has just recently completed major restorations and has been independently appraised at $32,000,000. The ship is open for visits from 24 May until 10 October.

The ship has also become a floating set for a number of maritime-related documentaries and television docudramas, including subjects involving the torpedoed ocean liner Lusitania, the burned-out Bahamas cruise ship Yarmouth Castle, Canadian Pacific's  Empress of Ireland, as well as Titanic. She was also used extensively in the opening episode of Season Seven, "Murdoch Ahoy," of Murdoch Mysteries. A documentary has been broadcast on CBC Canada was also made called "Bring Her on Home".

Keewatin is one of the largest of the remaining Edwardian era passenger steamers left in the world. The ship has become a time capsule of those days, along with a few other ships lucky enough to survive, such as Nomadic, lake steamer TSS Earnslaw (1913), (currently still operational in New Zealand), and surviving ex-Manly ferry MV Baragoola (1922) (out of service held in Australia). Keewatin is also noted as part of the evolution of the Great Lakes as a strong maritime center, and her long service record is attributed to her popularity and solid engineering.

Keewatin was originally designed to complete the link in the Canadian Pacific Railway's continental route. She and Assiniaboia joined three others, Manitoba, Athabaska, and Alberta (the latter two also built in Scotland). She served this purpose by linking the Railroad's Owen Sound depot to Fort William Port Arthur on Lake Superior. In 1912 Port McNicoll, Ontario, was established as the new 'super port' and rail terminus and the ships moved there. The ships took two and a half days to make the trip each way, including half a day traversing the Soo Locks. Port McNicoll was known as the "Chicago of the North" until the trains and ships were discontinued in 1965 following the completion of the Trans Canada Highway through northern Ontario, causing the town to practically die, as all of the rail and ship jobs left.

After languishing for a few years, in January 1967 Keewatin was bought by West Michigan entrepreneur Roland J. Peterson Sr. for $37,000, $2,000 more than it would have sold for scrap. It arrived on the Kalamazoo River in Douglas, Michigan, on 27 June 1967. The ship was known as Keewatin Maritime Museum, permanently docked, from 1968 until its relocation in 2012.

In August 2011 it was announced that the vessel had been sold to Skyline International Developments Inc., and was moved back to its home port of Port McNicoll, Ontario, on 23 June 2012, for restoration and permanent display as a maritime museum and event facility. This is possible because of the cooperation of the local and State officials in obtaining permissions and permits to dredge the harbor where Keewatin sat for 45 years to allow the ship to be moved. A not for profit foundation, the Diane and RJ Peterson Keewatin Foundation, has been formed to operate the ship and restore her. Skyline Developments, a publicly held corporation that is rebuilding the 12,000-acre (4,900 ha) Port McNicoll site, is funding this project.

Keewatin was moved from Kalamazoo Lake on Thursday, 31 May 2012, and docked about a mile down river just inside the pier for continued maintenance before entering Lake Michigan. It departed Saugatuck for the big lake on Monday, 4 June 2012, to continue its journey northward to Mackinaw City. There it had a temporary layover before the final leg of the trip to Port McNicoll.

On 23 June 2012, a major celebration marked Keewatin's return and the rebirth of a new planned community surrounding her. The date is significant as it was 45 years after Keewatin left Port McNicoll on 23 June 1967 and 100 years after 12 May 1912, the date that she began working from the same dock. The town staged the celebration, which included a 200-voice choir as part of the ceremonies.

In late 2017 plans were being discussed to move Keewatin to Midland, Ontario. By March 2018 it became clear that Keewatin would remain in Port McNicoll for another summer pending further relocation options. In 2019, development company CIM committed to incorporating Keewatin into a redevelopment plan at the Port McNicoll site; the plans called for the ship to remain as a museum in a park adjacent to the proposed mixed-use (residential and commercial) development. But by June 2020, Skyline Investments (owner of Keewatin and surrounding development properties) indicated CIM had defaulted on mortgage payments, and would instead be pursuing plans to donate the ship to the Marine Museum of the Great Lakes in Kingston, Ontario. Local opposition to the relocation from Port McNicoll has been spirited, and the fate of Keewatin remains unclear.

All content from Kiddle encyclopedia articles (including the article images and facts) can be freely used under Attribution-ShareAlike license, unless stated otherwise. Cite this article:
SS Keewatin Facts for Kids. Kiddle Encyclopedia.