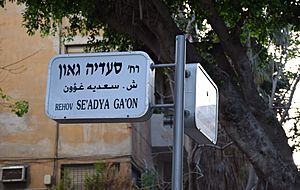 A street sign at the intersection of Se’adya Ga’on and HaHashmona’im streets in Tel Aviv.

He was born in al-Fayyūm, Egypt. When he was 28, he left Egypt and his wife and two sons, and traveled to Babylonia. There, he helped schools in many Jewish communities. After a while, he left Babylonia because he was not happy with the government.

As a religious scholar, he translated the Bible into Arabic and wrote many commentaries on it. He also wrote the first Hebrew dictionary and grammar dictionary, and many books on Talmudic law. One of his famous books is called Kitāb al-amānāt wa al-iʿtiqādāt ("Book of Beliefs and Convictions").

All content from Kiddle encyclopedia articles (including the article images and facts) can be freely used under Attribution-ShareAlike license, unless stated otherwise. Cite this article:
Saadia Gaon Facts for Kids. Kiddle Encyclopedia.