The Sacramento Municipal Utility District (SMUD) is a community-owned electric utility serving Sacramento County and parts of Placer County. It is one of the ten largest publicly owned utilities in the United States, generating the bulk of its power through natural gas (estimated 56% of production total in 2009) and large hydroelectric generation plants (22% in 2009). SMUD's green power (renewable) energy output was estimated as 19% in 2009.

SMUD owned the Rancho Seco Nuclear Generating Station nuclear power plant, shut down by a vote of the utility's rate-payers in the late 1980s. Although the nuclear plant is now decommissioned, its now-unused iconic towers remain on the site. Solar arrays and the 500-megawatt Cosumnes gas-fired plant have risen in proximity to the towers.

SMUD's headquarters building, built in the late 1950s on the edge of the East Sacramento neighborhood, is notable for its mural by Sacramento artist Wayne Thiebaud. The mural wraps around the ground floor of the building and is accessible to the public. It is one of the earliest major works by the artist, and remains his largest installation to date. 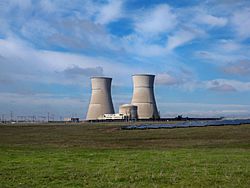 Created by a vote of Sacramento County residents on 2 July 1923 pursuant to the Municipal Utility District Act, SMUD's ability to provide power to its customer-owners was stymied in the courts for nearly a quarter century by the investor-owned Pacific Gas & Electric Company (PG&E) of San Francisco. A court ruling eventually sided with SMUD, which began providing power at the beginning of 1946. SMUD is a public agency of the State of California, and as such is not subject to the Federal Energy Regulatory Commission's jurisdiction under the Federal Power Act. Echoes of SMUD's fight to fulfill its original mandate from the voters have continued in more recent turf battles with PG&E. In the 1980s, residents of Folsom voted to join SMUD, with PG&E fighting the annexation in the courts. Folsom rate-payers are now part of SMUD. In 2006, PG&E successfully convinced SMUD rate-payers and rate-payers in Yolo County to vote down an annexation proposal that would have extended the public utility's service territory to include the Yolo County cities of West Sacramento, Davis and Woodland, along with territory between the three cities.

SMUD is governed by a seven-member Board of Directors. Each member is elected by residents in a "ward" or constituency for four-year terms. As of July 2020 the directors were: 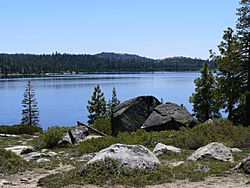 SMUD's electricity generation capacity derives from the watershed of the South Fork of the American River, called the "Upper American River Project (UARP)" in federal licensing documents. The project is an extensive complex of multiple retention dams, diversion dams, reservoirs, canals, tunnels and hydroelectric powerplants. The plants are run during hours of peak demand, though retaining sufficient flood control capacity dictates water releases to some extent.

From upstream to downstream, the District's UARP assets include:

SMUD is in the Advisory Council of the PHEV Research Center.

All content from Kiddle encyclopedia articles (including the article images and facts) can be freely used under Attribution-ShareAlike license, unless stated otherwise. Cite this article:
Sacramento Municipal Utility District Facts for Kids. Kiddle Encyclopedia.