Saffordville is an unincorporated community in Chase County, Kansas, United States. It is located about half way between Strong City and Emporia near the intersection of U.S. Route 50 highway and Zz Rd.

For millennia, the land now known as Kansas was inhabited by Native Americans. In 1803, most of modern Kansas was secured by the United States as part of the Louisiana Purchase. In 1854, the Kansas Territory was organized, then in 1861 Kansas became the 34th U.S. state. In 1859, Chase County was founded.

In 1871, the Atchison, Topeka and Santa Fe Railway built a main line east–west through Safford. In 1996, it merged with Burlington Northern Railroad and renamed to the current BNSF Railway. The Santa Fe depot building still exists, but has been closed for decades. Most locals still refer to this railroad as the "Santa Fe".

There has been numerous floods during the history of Saffordville. In June and July 1951, due to heavy rains, rivers and streams flooded numerous cities in Kansas, including Saffordville. Many reservoirs and levees were built in Kansas as part of a response to the Great Flood of 1951.

Saffordville was particularly impacted by the 1951 flood, as the entire town (which had 200 people at the time) was under five feet of water. Residents had to be evacuated, and when the waters receded many of them moved elsewhere, and the town quickly became a ghost town. Today, little remains other than two homes and a schoolbuilding.

The climate in this area is characterized by hot, humid summers and generally mild to cool winters. According to the Köppen Climate Classification system, Saffordville has a humid subtropical climate, abbreviated "Cfa" on climate maps.

U.S. Route 50 highway passes near Saffordville, and BNSF Railway passes through it. 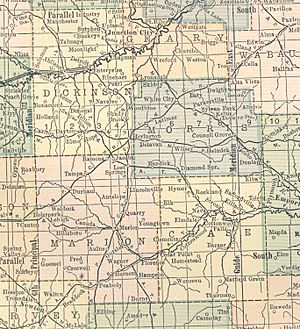 All content from Kiddle encyclopedia articles (including the article images and facts) can be freely used under Attribution-ShareAlike license, unless stated otherwise. Cite this article:
Saffordville, Kansas Facts for Kids. Kiddle Encyclopedia.