Saint-Jacques River is a river in southwestern Quebec, Canada that drains the Saint Lawrence Lowlands. It flows in a general south to north direction, from the area around Saint-Jacques-le-Mineur (in Les Jardins-de-Napierville) to its mouth in the Saint Lawrence River, at the border between the cities of Brossard and La Prairie.

The Saint-Jacques River meanders through the agricultural and forested lowlands of the Montérégie region near the Saint Lawrence River. As a result, it flows through and drains areas of sparse and dense population like agricultural towns and suburban cities on the south shore of the Island of Montreal.

The main hydrographic slopes near the Saint-Jacques River are:

The Saint-Jacques River flows first on 8.6 kilometres (5.3 mi) to the north, passing west of the village of Saint-Jacques-le-Mineur, Quebec, until the Méchal Creek mouth (coming from the southwest). In this first segment, it passes in the rank Saint-Philippe-Nord and Saint-Marc. Then, the river flows on the northwest to the village of Saint-Philippe-de-Laprairie which it crosses in serpentine fashion. From this village, the river flows northwest (3.4 kilometres (2.1 mi) serpentine to the mouth of Saint-André Creek (coming from the southwest). Then the river runs north on Autoroute 30 (east side) winding on 8.6 kilometres (5.3 mi) to the northeast in agricultural zones in the rang Saint-Joseph-Nord in the Town of La Prairie, Quebec, to the Autoroute 10. 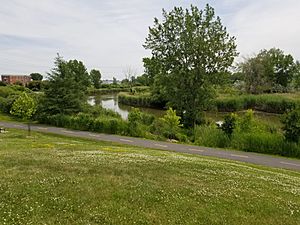 After crossing the Autoroute 10 at 1.0 kilometre (0.62 mi) east of the A10 junction and the A30, the Saint-Jacques River runs on 1.6 kilometres (0.99 mi) to the northwest in an agricultural zone until the autoroute 30 which it crosses at 0.8 kilometres (0.50 mi) north of the junction of the A10 and the A30. Then the river flows northwest (4.3 kilometres (2.7 mi) past the Brossard, Quebec Illinois Park and serpentine to route 134, which is Taschereau Boulevard. This last segment of the river passes east of Parc Émilie-Gamelin in La Prairie, Quebec and collects the waters of Saint-Claude stream (coming from the east) whose main tributaries are the "ruisseau des Bois" and the "Battle Creek". In this last segment, the Saint-Jacques River runs westward across a golf course and serving more or less of a boundary between the cities of Brossard, Quebec and La Prairie, Quebec.

Regional Park of the Saint-Jacques River

The creation of the Saint-Jacques Regional Park is sponsored by the Ville-Marie Priority Intervention Area Committee (ZIP). The area between Taschereau Boulevard and Autoroute 30 includes public lands whose transfers to cities are yet to be completed. In the long term, this regional park project aims to encompass the Boisé de Brossard (largely composed of private land) and the "Boisé de la Commune" in La Prairie (entirely composed of private land). 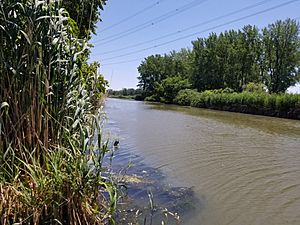 From the seaway, this river is navigable by canoe and kayak to the east of Autoroute 30. This watercourse, which delimits the towns of Brossard and La Prairie, Quebec, is surrounded by former farmland. Its banks, which are generally bare of trees, include turtles and water birds such as ducks and herons. Hypothetically, this area could be transformed into a regional park encompassing the surrounding woodlands; this park could cover a larger area than the Mont-Saint-Bruno National Park. The river is accessible via Radisson Park where visitors can rent river boats.

In December 2014, the City of Brossard acquired for a million dollars a strip of 50-meter (55 yard) wide riparian lands covering 9830 square meters (2½ acres), between Radisson Park and Taschereau Boulevard, with the objective of protecting this waterfront.

The Saint-Jacques River was first described by Samuel de Champlain in his notes on his 1611 voyage along the Saint Lawrence River and in the area around La Place Royale on the Island of Montreal:

All content from Kiddle encyclopedia articles (including the article images and facts) can be freely used under Attribution-ShareAlike license, unless stated otherwise. Cite this article:
Saint Jacques River (Roussillon) Facts for Kids. Kiddle Encyclopedia.