Kids Encyclopedia Facts
This page is about the city. For the adjacent town, see Salamanca (town), New York.

Salamanca is a city in Cattaraugus County, New York, United States, located inside the Allegany Indian Reservation, one of two governed by the Seneca Nation of New York. The population was 5,815 at the 2010 census. It was named after José de Salamanca, a Spanish nobleman and cabinet minister of the mid-19th century.

Salamanca is located within the Allegany Indian Reservation of the Seneca Nation of New York (one of the six tribes of the Iroquois Confederacy). The city population of about 5,800 is about 17% Native American; this does not include Seneca people living in the adjacent hamlets of Jimerson Town (one of the two capitals of the nation) and Kill Buck. The city lies along the Allegany River and is adjacent to Allegany State Park.

Salamanca serves as a hub for public bus service in the area. Coach USA, Fullington Trailways, the Seneca Transit System, and the Olean Area Transit System all converge on the city.

What is now known as the city of Salamanca was originally two separate communities, one on Little Valley Creek and the other on Great Valley Creek; the westernmost one of the two was called "Hemlock", a name derived from the numerous hemlock trees throughout the surrounding mountains. Hemlock was later renamed "West Salamanca" and (although it was marked on road signs as late as the 1990s) was eventually incorporated into the single city of Salamanca. The city was incorporated in 1913. 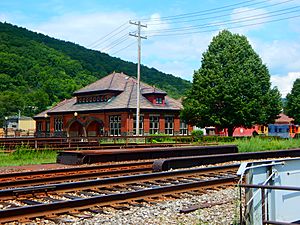 Salamanca station for the Buffalo, Rochester and Pittsburgh, now the Rail Museum

At one time the city was a thriving railroad hub, with the Erie Railroad, the Baltimore & Ohio (later Conrail), and the Buffalo, Rochester and Pittsburgh Railway all having facilities there. Generations of Salamanca residents worked for the railroads, and much of the housing was originally built for them by the railroads. The city also benefited from the then-thriving lumber industry that dominated much of southwestern Cattaraugus County at the turn of the century, as boomtowns along the Allegheny River such as Elko, South Valley and Red House (all much less populated ghost towns today) all used the railroads to ship their goods upstream. At the time of the city's incorporation, it peaked at just under 10,000 residents, not far behind that of Olean, the major hub of the county; Olean, however, would continue to grow rapidly into the 1950s, while Salamanca's population would begin falling behind almost immediately. The Salamanca Rail Museum was opened in the former BR&P depot in 1984 to house the archives.

The majority of the city, with the exception of a northeastern spur along Great Valley Creek, was constructed on the Allegany Indian Reservation held by the Seneca Nation of New York, as established in various treaties. Under the nation's policy, non-Seneca residents are barred from owning real property on the reservation, and non-Senecas can only lease the property from the Seneca Nation. As arranged by the railroads, the previous leases had nominal payments and covered only the land; improvements (i.e., buildings and houses) were considered to be owned by the non-native citizens.

When the leases expired in the early 1990s, the nation tried to gain more from its leases, raising their costs and asserting that not only the land, but the improvements were also subject to the native leases. Numerous people living in the city did not agree on the amount of lease payments or the legitimacy of the Senecas' absolute ownership claim. The controversy aroused bitterness, lawsuits, and appeals to government officials. Congress passed a law explicitly placing the improvements under Seneca jurisdiction, the new leases were put into effect, and fifteen houses were seized and their owners evicted for refusing to sign the leases. The current leases are in effect until 2030, with an option to extend until 2070; proceeds from the lease payments are distributed quarterly to enrolled Seneca Nation members, providing a basic income guarantee.

Despite the lack of ownership, leased land held by non-Senecas is subject to property tax, which the lessee must pay to the city, Cattaraugus County, and the Salamanca City Central School District. Seneca-owned land is exempt under the Treaty of Buffalo Creek. Once a Seneca acquires the land, it is taken off the tax rolls; for this reason, the city of Salamanca does not auction off abandoned properties on the reservation in a property tax auction, for fear that Seneca individuals will buy the land, removing it from the tax rolls.

There were 2,469 households out of which 31.6% had children under the age of 18 living with them, 42.2% were married couples living together, 15.6% had a female householder with no husband present, and 36.2% were non-families. 31.8% of all households were made up of individuals and 15.3% had someone living alone who was 65 years of age or older. The average household size was 2.41 and the average family size was 3.00.

All content from Kiddle encyclopedia articles (including the article images and facts) can be freely used under Attribution-ShareAlike license, unless stated otherwise. Cite this article:
Salamanca (city), New York Facts for Kids. Kiddle Encyclopedia.