Salford Lads' Club is a recreational club in the Ordsall area of Salford, Greater Manchester, England. The club, on the corner of St. Ignatius Walk and Coronation Street, was established in 1903 as a boys' club but today welcomes people of both sexes and organises activities including sports and exhibitions.

The club was officially opened on 30 January 1904 by Robert Baden-Powell, who later founded the Scout movement. Former members include footballers Albert McPherson, Steve Fleet, Eddie Colman and Brian Doyle, Allan Clarke, lead singer of 1960s pop group The Hollies, and Graham Nash, guitarist, songwriter and singer with The Hollies who went on to form Crosby, Stills, Nash and Young.

The building gained listed status in 2003 as its tiled interior is virtually unchanged with original fittings and includes a boxing ring, snooker rooms and a gym with a viewing balcony. English Heritage said: "The building is thought to be the most complete example of this rare form of social provision to survive in England." In 2007, the Manchester Evening News reported that the building, which was used for the sleeve of The Smiths album The Queen Is Dead, came third in a nationwide hunt to find the most iconic buildings in the country. 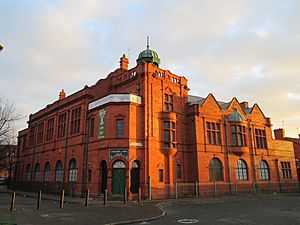 The building includes a boxing ring, snooker rooms and a gym

The concept of a boys' club grew up in the 19th century as a way of keeping young boys "off the streets" and encouraging them to become "good and worthy God-fearing citizens". The clubs were usually set up by local philanthropic businessmen and it was soon realised that to compete with the outside attractions of freedom from restraint and gambling they must provide not only for draughts, bagatelle, and billiards but for more exciting pursuits that most boys could not otherwise obtain such as gymnastics, boxing, fives, swimming and, especially, outdoor games.

In Salford and Manchester, a number of these clubs grew up in the most deprived areas, the first of which was Hulme Lads' Club, founded in 1850. Salford Lads' Club was founded in 1903 by two brothers, James and William Groves, from the family of brewers that were partners with Arthur William Whitnall in the Groves and Whitnall Brewery on Regent Road in Salford. Built and designed by Salford architect Henry Lord, who was also responsible for the former Salford Royal Hospital and Salford Museum and Art Gallery, the club opened in August 1903 and the ceremonial opening was by Robert Baden-Powell on 31 January 1904 three years before he founded the Scout movement.

The club has held an annual camp holiday since 1904. According to club worker and local artist Leslie Holmes: "Salford Lads' Club has a remarkable tradition that predates the first Scout camps set up by Lord Baden Powell. Salford Lads' Club first camp was at Llanddulas in 1904, when 173 boys took part." The camps have been held during Whitsun since 1934.

The 1960s pop group The Hollies used to practice at the club before they became famous. Allan Clarke and Graham Nash were both members and their membership cards are still in the club's archives.

The club gained international fame in 1986 when the alternative rock band The Smiths posed in front of the building for the inside cover of their album The Queen Is Dead. The Smiths' music video for the songs "There Is A Light That Never Goes Out" and "Stop Me If You Think You've Heard This One Before" also featured shots of the building's exterior. The committee were said at the time to be furious, and solicitors acting for the club claimed that;

...inclusion of the photograph may generally cause any person reading the [album] or listening to the record to attribute the material to the club, its committee or its members ... we would cite for example the reference in the song Vicar in a Tutu to the singer being engaged in stealing lead from a church roof, or indeed the very title to the album itself and the tenor of the title song."

However, over the last few years the club has begun to embrace this more recent legacy and welcome the fans to the club. The photograph, taken by pop photographer Stephen Wright, was accepted into the National Portrait Gallery in 2008. The club also featured in the music video for The Dream Academy's "Life in a Northern Town".

In 2003 a film documentary was made as part of the celebrations for the club's centenary. The film, which was introduced by Peter Hook, bassist for Joy Division and New Order, who lived on the Ordsall estate until he was 19, was made with the help of elderly residents and young members of the club and is a mix of interviews and location shots.

The musician Vinny Peculiar, also known as Alan Wilks, has a longstanding association with the club, supporting various club events, performing for visiting Morrissey fans with ex-Smiths bassist Andy Rourke and rehearsing with his band, which includes ex-members of The Smiths, Oasis and The Fall.

The building has also been used as the location for a number of films and television dramas, including Channel 4's Shameless, Granada TV's 2002 remake of The Forsyte Saga, the film version of the Jacqueline Wilson's novel "Illustrated Mum", the BBC police drama Conviction and, in 2008, the remake of the 1970s BBC series Survivors.

The club was also seen in the opening sequence of BBC Sport's The Football League Show until the end of the 2011–12 season. On 19 December 2011, it was the setting for BBC One's first-ever outside broadcast of Football Focus.

In recent years the club has fallen into disrepair, and in May 2007, Warren Smith, Chairman of LPC Living and HRH Duke of Gloucester, launched an appeal to raise £1 million to restore the building to its former glory. The club received publicity and funds after being featured in the Channel 4 series The Secret Millionaire in November 2007. Property developer Chek Whyte initially donated £15,000 towards repairs as part of the programme, then subsequently paid for roof repairs and has become involved with the club long-term.

Former Smiths' frontman Morrissey has also donated funds towards restoration. He initially wanted to keep his donation of £20,000 a secret but was dissuaded from doing so, because the publicity would help the campaign.

In 2008 Vinny Peculiar released a single to support the club's £1 million fundraising drive. The song "Lazy Bohemians" was taken from his solo album Goodbye My Angry Friend. The B side and bonus download track of the single called "Ghost Camp", a song he co-wrote with former Smiths guitarist Craig Gannon, was written for a Salford Lads' Club award-winning play. The writer said: "Lazy Bohemians is a self-deprecating swipe against those whose talk about a revolution that never seems to get anywhere, a personal wake-up call to political apathy. My goal for this song is to really attract people's attention and wake people up from the apathy surrounding the club, making them realise that if we don't help it, the club, its fine musical history, and all of the good work it does with local kids will eventually, disappear".

Two of the longest-serving volunteers, Arthur Edward (Archie) Swift and Eric Salthouse have between them over 100 years of service with the club. They have both won accolades for their work: Swift was awarded the 'Salford Citizen of the Month' in April 2004 for his lifetime work as a volunteer at the club and Salthouse was named as 'My Hero' by Manchester entrepreneur Dave Tynan in the June 2004 edition of Social Enterprise magazine. Swift was also awarded the MBE for services to Young People. (Salford, Greater Manchester) In the HM the Queen's Birthday Honours List 2006.

All content from Kiddle encyclopedia articles (including the article images and facts) can be freely used under Attribution-ShareAlike license, unless stated otherwise. Cite this article:
Salford Lads' Club Facts for Kids. Kiddle Encyclopedia.