Saltville is a town in Smyth and Washington counties in the U.S. state of Virginia. The population was 2,077 at the 2010 census. It is part of the Kingsport–Bristol (TN)–Bristol (VA) Metropolitan Statistical Area, which is a component of the Johnson City–Kingsport–Bristol, TN-VA Combined Statistical Area – commonly known as the "Tri-Cities" region.

Saltville was named for the salt marshes in the area. Prior to European settlement, these marshes attracted local wildlife. Excavations at the SV-2 archaeological site in the area have recovered several well preserved skeletons of now extinct species dating back to the last ice age. Indigenous peoples of varying cultures hunted at the marshes. The historic Native American people in the area were the Chisca.

Archaeologists in 1992 proposed the existence of a prehistoric "Saltville Complex Petty Chiefdom", with a paramount village located at the Northwood High School site, 44SM8. They reported "Saltville style gorgets" as well as iron and copper materials, scattered across the region.

During the spring of 1567, Spanish conquistador Hernando Moyano de Morales led a force of 15-20 soldiers northward from Fort San Juan in Joara, a city in what is now western North Carolina. The force attacked and burned the Chisca village of Maniatique, which may have been located at or near the site of Saltville.

During the American Civil War, Saltville was one of the Confederacy's main saltworks. The saltworks were considered vital to the Confederate war effort because the salt was used in preserving meat for Confederate soldiers and civilians. Because of its importance, the town was attacked by Northern forces intent on destroying the saltworks. On October 2, 1864 the First Battle of Saltville was fought here. In the battle Union forces attacked Saltville but were defeated by Confederate troops. Following the battle a number of wounded black troops were murdered in what was dubbed the "Saltville Massacre." (Shortly after the war Champ Ferguson was tried, convicted, and executed for war crimes for this and other killings.)

Two months later General George Stoneman, a Union cavalry commander, led a second attack on the saltworks (known as the Second Battle of Saltville). This time the Confederates were defeated and the saltworks were destroyed by Union troops. The loss of the Saltville works was considered a major blow to the Confederacy's dwindling resources. 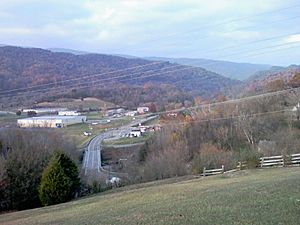 The View from Battle at Cedar Branch marker above Saltville.

The salt caverns in Saltville, Virginia are used for gas storage, the only one to serve the Mid-Alantic states. The cavern type in Saltville, is considered the best for this purpose because the gas can be injected and removed quickly to meet immediate demand. The structure is very safe and has the structural strength of steel.

Saltville was the location of the infamous "Muck Dam" break on December 24, 1924 which allowed the release of a huge volume of liquid chemical waste (stored there by the Mathieson Alkali Company) into the North Holston River taking the lives of nineteen people who lived along the river. The river remained polluted and virtually dead for several decades afterward.

Museum of the Middle Appalachians

Saltville is also home of the Museum of the Middle Appalachians. The museum is centrally located in the town and offers an excellent view into the past of the town and the region. The museum displays numerous exhibits on topics such as the geologic past, Civil War, the company town, and the Woodland Indians.

There were 879 households out of which 24% had children under the age of 18 living with them, 45.4% were married couples living together, 14.6% had a female householder with no husband present, and 32.5% were non-families. The average household size was 2.36 and the average family size was 2.91.

Climate in this area has mild differences between highs and lows, and there is adequate rainfall year-round. The Köppen Climate Classification subtype for this climate is "Cfb". (Marine West Coast Climate/Oceanic climate).

All content from Kiddle encyclopedia articles (including the article images and facts) can be freely used under Attribution-ShareAlike license, unless stated otherwise. Cite this article:
Saltville, Virginia Facts for Kids. Kiddle Encyclopedia.