Santa Clara is a town in Franklin County, New York, United States. The population was 345 at the 2010 census. The name was derived from the wife of an early town businessman, John Hurd.

The town of Santa Clara was formed from part of the town of Brandon in 1888. An addition from Brandon was added to Santa Clara in 1896.

William Rockefeller began buying property in the town around 1896 in order of establish an estate, used by members of his family during the summer.

The St. Regis Mountain Fire Observation Station was listed on the National Register of Historic Places in 2005.

Santa Clara is the second largest town in the county. The south part of the town is dominated by numerous lakes.

The St. Regis River, a north-flowing tributary of the St. Lawrence River, flows out the west town line.

There were 155 households, out of which 31.6% had children under the age of 18 living with them, 63.2% were married couples living together, 9.0% had a female householder with no husband present, and 22.6% were non-families. 20.0% of all households were made up of individuals, and 8.4% had someone living alone who was 65 years of age or older. The average household size was 2.55 and the average family size was 2.90.

Communities and locations in Santa Clara 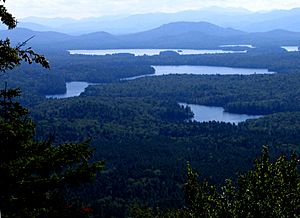 View from Long Pond Mountain of waters of the St. Regis Canoe Area (with the High Peaks in the background)

All content from Kiddle encyclopedia articles (including the article images and facts) can be freely used under Attribution-ShareAlike license, unless stated otherwise. Cite this article:
Santa Clara, New York Facts for Kids. Kiddle Encyclopedia.