Kids Encyclopedia Facts
Not to be confused with Rancho Santa Margarita, California, a city in Orange County. 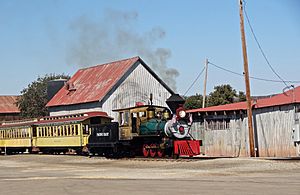 The narrow-gauge steam train is a popular attraction at the historic Santa Margarita Ranch.

Located in the foothills of the Santa Lucia Mountains, it is one of the most rural communities in San Luis Obispo County. Santa Margarita Lake, a major water source for San Luis Obispo, is located several miles southeast of the town on the headwaters of the Salinas River. It is served by the zip code 93453 and area code 805.

According to the United States Census Bureau, the CDP covers an area of 0.5 square miles (1.3 km²), all of it land.

Santa Margarita Valley, with its year-round running streams and abundant acorns, was a meeting place for northern Chumash and southern Salinan around 6500 CE. The de Anza Expedition traversed the Cuesta Grade into the valley in 1776. After Fr. Junipero Serra founded the Mission San Luis Obispo de Tolosa, he realized that an assistancia (sub-mission) was needed. The Santa Margarita de Cortona Asistencia was founded circa 1775, and was named for the Italian Saint, Santa Margarita de Cortona. The Spanish El Camino Real trail past it is the city's present-day main street.

In 1841 after Mexico’s 1822 independence and 1830s mission secularization, Joaquin Estrada became the owner of the Rancho Santa Margarita. Estrada was famed for his “Rancho Hospitality” with rodeos, BBQs and fiestas. After downturns in the economy and personal debts, Estrada sold the Rancho to the Martin Murphy family in 1860.

Patrick Murphy worked to restore the Rancho to a working agricultural ranch. On April 20, 1889 the Southern Pacific Railroad reached Santa Margarita from Templeton. A “Grand Auction” was held to sell lots for the new town of Santa Margarita along the El Camino Real. While construction down the Cuesta Grade took place, the railroad terminus was in Santa Margarita. This created a boom time in the community. All freight had to be loaded for stage transportation up and down the Cuesta Grade. Town boasted a hotel, restaurants, taverns, blacksmiths, and ice cream parlors. Once the “gap” was closed from Santa Margarita to San Luis Obispo in 1894 the town grew quiet.

Margarita Town saw a renaissance in the roaring 1920s. The El Camino Real was one of the primary roads for seeing California. The town sported a motor inn, hotel, 6 gas stations, garages, pool halls, restaurants, fraternal organizations, taverns and a baseball team.

The Depression hit town and the surrounding areas hard. The War Department took land from local farmers to build a reservoir on the Salinas River which created Santa Margarita Lake to provide water for Camp San Luis. The war ended before the work was completed and Santa Margarita Lake is now a County Recreation Area.

All content from Kiddle encyclopedia articles (including the article images and facts) can be freely used under Attribution-ShareAlike license, unless stated otherwise. Cite this article:
Santa Margarita, California Facts for Kids. Kiddle Encyclopedia.