Santee is a town in Orangeburg County along the Santee River Valley in central South Carolina of the United States. It has become a resort town of note located centrally north-south along the Atlantic Seaboard of South Carolina. The region has been rural, with a primarily agricultural economy typical of Orangeburg County, but it is now known primarily for its several golf courses in proximity to Lake Marion, Santee State Park and other Lake Marion attractions. Interstate 95 connects its attractions easily with tourists' traveling by automobile. I-95 crosses a narrow arm of the lake into the town lands, along a picturesque causeway. Lake Marion is a man-made hydroelectric reservoir, which at 110,000 acres (450 km2, 173 sq mi) is one of the fifty largest lakes in the country.

The population was 740 at the 2000 census. The town has been undergoing economic and population growth, and development as rural niches are supplanted by bedroom communities.

Construction of the Santee Cooper Regional Water System can provide millions of gallons of potable water per day to the surrounding five counties centered about Santee. The system was coordinated by the U.S. Department of Agriculture and funded by the Army Corps of Engineers, USEPA, and the South Carolina Department of Commerce. The plant was completed and operational as of 1 June 2008. Work to connect the plant to the five counties (Berkeley, Orangeburg, Dorchester, Calhoun, and Sumter) is underway and being overseen and funded by the same parties. Currently, the RWS serves the town of Santee, with pipeline rapidly being installed to other locations. Incoming businesses from this project are projected to bring thousands of jobs to the area.

The Lake Marion High School & Technology Center is located in the town.

There were 310 households out of which 27.4% had children under the age of 18 living with them, 41.0% were married couples living together, 26.8% had a female householder with no husband present, and 28.7% were non-families. 26.5% of all households were made up of individuals and 14.2% had someone living alone who was 65 years of age or older. The average household size was 2.39 and the average family size was 2.85. 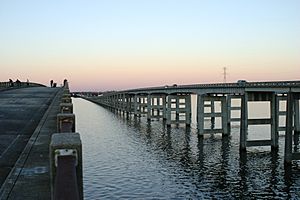 Interstate 95 bridge over Lake Marion, Santee, SC; The old (bypassed road) bridge/causeway is used as fishing pier. Man-made in the 1930s on the farmlands and marshes of the Santee River valley, Lake Marion is famous for trophy-quality game fish, especially small and large mouth bass. 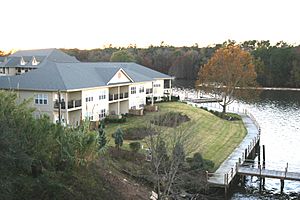 All content from Kiddle encyclopedia articles (including the article images and facts) can be freely used under Attribution-ShareAlike license, unless stated otherwise. Cite this article:
Santee, South Carolina Facts for Kids. Kiddle Encyclopedia.