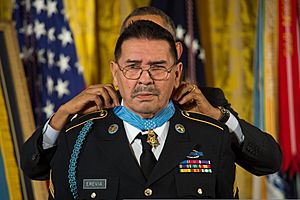 In 1970, Erevia left active service with a two-year reserve obligation. In 1972 he joined the Texas National Guard and went on to serve 17 years. Erevia worked as a mail carrier for the United States Postal Service, retiring in 2002 after thirty-two years of service.

Erevia was awarded the Medal of Honor by President Barack Obama in a March 18, 2014 ceremony at the White House.

All content from Kiddle encyclopedia articles (including the article images and facts) can be freely used under Attribution-ShareAlike license, unless stated otherwise. Cite this article:
Santiago J. Erevia Facts for Kids. Kiddle Encyclopedia.