Sargent is a city in Custer County, Nebraska, United States. The population was 525 at the 2010 census.

Sargent was laid out in 1883 by future Governor Ezra P. Savage.

Mrs. Ruth Sherman established a post office in 1879. The office was located in a soddy one half mile east of the now corporate limits of town. She chose the name "Sargent" in honor of her close friends, Mr. and Mrs. E.D. Sargent of Streator, IL.

J.K. Spacht built the first store in what is now Sargent, in July 1883, in the middle of a wheat field. After establishment of this general store, Mr. Spacht was able to persuade Mrs. Sherman to let him move her post office to his store if the name would remain "Sargent".

The town experienced rapid growth when the railroad extended to it in 1899.

According to the United States Census Bureau, the city has a total area of 1.07 square miles (2.77 km2), all land.

Sargent is located on U.S. Route 183 (Ord Street) and is close to the geographic center of Nebraska. It lies next to the Middle Loup River. 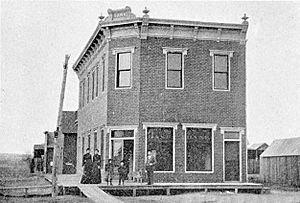 There were 245 households, of which 25.7% had children under the age of 18 living with them, 48.2% were married couples living together, 8.6% had a female householder with no husband present, 3.7% had a male householder with no wife present, and 39.6% were non-families. 36.3% of all households were made up of individuals, and 20% had someone living alone who was 65 years of age or older. The average household size was 2.14 and the average family size was 2.76.

All content from Kiddle encyclopedia articles (including the article images and facts) can be freely used under Attribution-ShareAlike license, unless stated otherwise. Cite this article:
Sargent, Nebraska Facts for Kids. Kiddle Encyclopedia.