Schaefferstown (Pennsylvania German: Schaefferschteddel) is an unincorporated community and census-designated place (CDP) in Heidelberg Township, Lebanon County, Pennsylvania, United States. The population was 941 at the 2010 census. 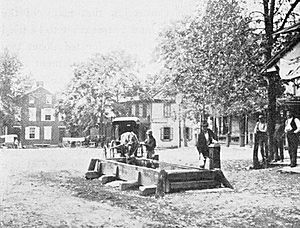 Schaefferstown is one of the oldest towns in Lebanon County (which was formed from Lancaster County, Pennsylvania in 1813), being at least a century older than the county itself. It is the main town in Heidelberg Township. Although the exact date of the first settlers is unknown, it is certain that they settled here before 1725. Those first settlers were German Jews. Many of them were skilled craftmen and traders. They disappeared, however, when non-Jewish German settlers started moving into the area. The old burial ground was situated about a fourth mile south of Tower Hill and almost a hundred yards east of South Market Street in Schaefferstown. The Jewish settlement was known as the Lebanon Trading Post.

Schaefferstown held a Bicentenntial in 1963.

According to the United States Census Bureau, the CDP has a total area of 2.7 square miles (7.0 km2), all of it land.

It is home to Fountain Park, which is the oldest Chartered Waterworks still in operation in the United States. It drains southward into the Cocalico Creek (a tributary of the Conestoga River) and is served by Routes 419, 501, and 897. 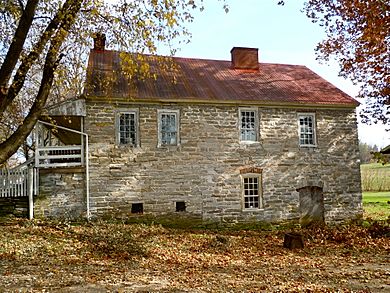 There were 374 households, out of which 31.8% had children under the age of 18 living with them, 67.4% were married couples living together, 6.7% had a female householder with no husband present, and 23.3% were non-families. 20.6% of all households were made up of individuals, and 9.4% had someone living alone who was 65 years of age or older. The average household size was 2.63 and the average family size was 3.04. 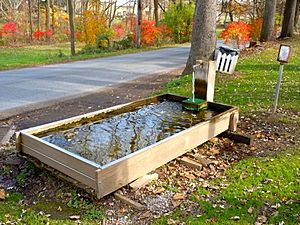 The water company in Schaefferstown has the oldest gravitational conveyance system by underground pipes in the United States. The water system was constructed sometime between 1744 and 1750 by the founder of the town, Alexander Schaeffer. The water system, which is located in the area now known as Fountain Park, is still used by the townspeople for potable household water. When the original system was laid out, it ran to two wooden troughs on the Square, which is now the intersection of Main St. and Market St. One trough was since replaced by Matilda Zimmerman in memory of Mary Rex Zimmerman, her mother and great granddaughter of Alexander Schaeffer. This trough is now located on the south face of the historic bank located within the Square.

All content from Kiddle encyclopedia articles (including the article images and facts) can be freely used under Attribution-ShareAlike license, unless stated otherwise. Cite this article:
Schaefferstown, Pennsylvania Facts for Kids. Kiddle Encyclopedia.