Scotts Run is a geographical division of the Cass District in Monongalia County, West Virginia, United States. Currently, it encompasses thirteen small, unincorporated communities. Located a few miles from Morgantown, this area's predominant industry in the early twentieth century was coal mining and production. Scotts Run became well known nationally during the years of the Great Depression, when photographers and the relief efforts of First Lady Eleanor Roosevelt publicized the impoverished conditions faced by the community. Since the decline in the coal industry in the area, Scotts Run's population has rapidly decreased. However, the current community is active in revitalization efforts to promote new businesses and heritage tourism.

In the late 19th century, Scotts Run main industry was agriculture. The population was largely homogenous, consisting of American-born white farmers who owned small plots of land. Because the hillsides were unsuitable for most crops, the farmers of the Cass District mostly raised livestock, particularly sheep and cattle. Farmers were primarily forced out of the area because of high land prices after the coal fields began to be developed.

Geologist William Barton Rogers conducted the first surveys of the coal producing potential of the area in 1836. By 1902, two companies had purchased land near the mouth of the Run. However, the lack of a railroad outlet slowed the development of the area, until the Morgantown and Wheeling Railroad was completed in 1916. Demand for coal produced by World War I contributed to the rush to develop the coal field.

Scotts Run is part of the Fairmont Coal Field, which is on the Pittsburgh coal seam. The large Pittsburgh seam was known as “the most valuable mineral deposit in the world.” From the years of 1917 and 1932, between World War I and the Great Depression, the Scotts Run area faced rapid industrialization and intense development of the bituminous coal industry. Despite geographic limitations, the area's development was one of the fastest in the nation. During this fifteen-year period, at least sixty mines operated in the area.

Development also brought about changes in Scotts Run’s population. The industry’s rapid expansion resulted in a labor shortage, which was filled by a flood of workers moving into the area. Not only was the population steadily increasing, it was also becoming much more diverse. Many of the people moving into the area were immigrants and African Americans. By 1930, thirteen percent of Cass District’s population were immigrants, while another thirteen percent were African American. These new residents provided a secure labor force for mining expansion.

The development of the Scotts Run area coincided with the mechanization process of the 1920s. The emergence of coal-loading machines and gathering locomotives replaced hand-loading and mules.

Scotts Run’s largest boom year was 1923, during which thirty-seven mines from thirty-three different companies actively operated. However, the overextended industry was in steady decline until 1923 until the beginning of the Great Depression in 1929. 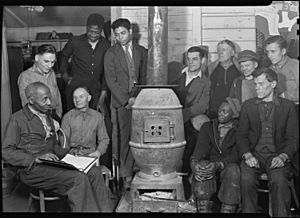 The coaling industry, in comparison to the boom of the 1920s, had basically collapsed by 1932. Already suffering, the industry could not sustain the economic downturn brought about by the Stock Market Crash of 1929. Residents of Scotts Run not only suffered from unemployment, but also from ethnic and racial prejudice and limited educational opportunities.

The rampant poverty in Scotts Run attracted the attention of Protestant missionaries and the American Friends Service Committee in 1931. Later in 1933, the Roosevelt administration sent relief workers. Scotts Run became America’s image for the bleakness of the Great Depression. One writer for ‘’Atlantic Monthly’’declared that Scotts Run was “the damndest cesspool of human misery I have ever seen in America.” Although the suffering at Scotts Run was probably no different than in other coal hollows of Appalachia, it garnered national attention because of its accessibility to photographers, reporters, social workers, and government officials through automobile and railroad.

First Lady Eleanor Roosevelt also brought national attention to the Run. Roosevelt first toured the mine camps of the area in 1933, and returned several times, foraging long-term relationships. Following the first lady were media outlets and famous photographers such as Walker Evans, Marion Post Wolcott, and Ben Shahn. Eleanor Roosevelt’s involvement culminated in the relocation of a number of families at the resettlement community of Arthurdale in nearby Preston County.

Local relief efforts also existed. The Scotts Run Settlement House, in existence since 1922, provided a large amount of assistance. Another example was Morgantown’s First Presbyterian Church’s establishment of a missionary project for Scotts Run, which opened “The Shack,” a community center which eventually was used to start a co-op for supplemental farming.

The 1930s marked a steady decline in industrial work in Scotts Run. Many of the residents relocated, some to Arthurdale, and many of the younger male residents served in the armed forces during World War II and did not return to the area upon the war’s end.

The thirteen mining communities along Scotts Run had a reputation of being “disaster free,” before World War II. The owners of the Christopher and Pursglove mines in particular were known as being highly safety conscious, and had even won awards for the safety of their mines. However, in 1942 and 1943, the dangers of mechanization, coupled with the added production pressures placed on the mines by the war effort, would cause three mine disasters to occur along Scotts Run within nine months of each other.

On May 12, 1942, a locomotive cable short-circuited at the same time as a malfunction with one of the ventilation doors, and it caused a methane explosion and collapsing roofs. Fifty-six men total were killed in the blast.

On July 9, 1942, the nearby Pursglove No. 2 mine experienced an explosion when a roof fall caused a 550-volt trolley wire to fall onto the track and ignite the methane and coal dust filled air. The mine had used substandard rock dust to coat the mine’s surface, which could have contributed to the intensity of the blast. Twenty were killed.

A third disaster occurred on January 8, 1943, when a haulage locomotive caught fire and eleven men sent to fight the blaze were suffocated by the smoke.

Mine mechanization made a large labor force extraneous, and the population of Scotts Run has been in steady decline since the 1930s. New technologies also produced locomotives reliant on diesel engines lessened the demand for coal. By the 1950s, the mines left in the Run were consolidated into a few large parcels, mostly controlled by the Consolidation Coal Company. Finally, the construction of Interstate 79 bisected the Scotts Run area and eliminated remaining coal company housing.

Remnants of the mining industry remain scattered about the region, such as rusting mine tipples and acid run-off in the water.

Although the population is much smaller than during the coal boom, residents are actively attempting to preserve Scotts Run’s history and bring new business to the area.

All content from Kiddle encyclopedia articles (including the article images and facts) can be freely used under Attribution-ShareAlike license, unless stated otherwise. Cite this article:
Scotts Run, West Virginia Facts for Kids. Kiddle Encyclopedia.