Seal of Oklahoma facts for kids

The seal itself contains six seals: 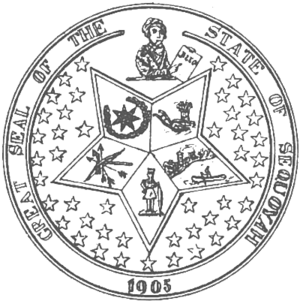 The Great Seal of the proposed State of Sequoyah

The seal was adopted by the 1905 constitutional convention of the proposed state of Sequoyah. Sequoyah, named for the inventor of the Cherokee syllabary, was a bid for statehood by Indian Territory, which comprised the eastern half of present-day Oklahoma.

All content from Kiddle encyclopedia articles (including the article images and facts) can be freely used under Attribution-ShareAlike license, unless stated otherwise. Cite this article:
Seal of Oklahoma Facts for Kids. Kiddle Encyclopedia.