Kids Encyclopedia Facts
Not to be confused with Seattle Marine Aquarium, an aquarium on Pier 56 which closed in 1977.

The Seattle Aquarium is a public aquarium in Seattle, Washington, United States, located on Pier 59 on the Elliott Bay waterfront. It opened in 1977 and has been accredited by the Association of Zoos and Aquariums (AZA).

The aquarium opened on May 20, 1977, and was initially owned and operated by the City of Seattle's Department of Parks and Recreation. On July 1, 2010, the nonprofit Seattle Aquarium Society - the official 501(c)(3) nonprofit organization for the aquarium - assumed management of the institution from the city. Bassetti/Norton/Metler/Rekevics were the architects for the building.

The aquarium promotes marine conservation and educates over 800,000 visitors each year (including 50,000 students) on the impact of mankind on marine life. It also conducts research in these fields. In 2007, an 18,000-square-foot (1,700 m2) expansion added a 2,625-square-foot (243.9 m2) gift store and café to the aquarium, as well as two new exhibits: Window on Washington Waters and Crashing Waves. 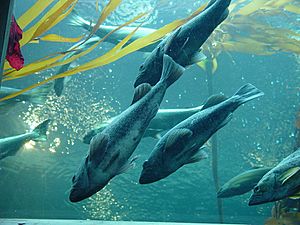 Rockfish in the aquarium's underwater dome 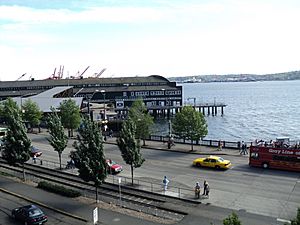 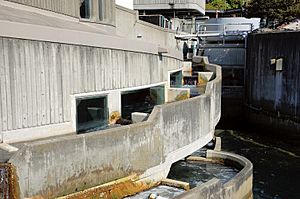 All content from Kiddle encyclopedia articles (including the article images and facts) can be freely used under Attribution-ShareAlike license, unless stated otherwise. Cite this article:
Seattle Aquarium Facts for Kids. Kiddle Encyclopedia.