Secane is a small community in Delaware County, Pennsylvania, United States. It is located in two school districts, Upper Darby and Ridley School District. It is located between Primos and Morton and is one of the stops on SEPTA's Media/Elwyn Line, which runs to/from Philadelphia and Elwyn. The train stop was built in 1871 and has the words "Spring Hill" inscribed into the cornerstone of the building. Spring Hill was the name of Secane before it changed to Secane because of the springs that run under the ground. Because of these springs most of the houses in Secane do not have basements. 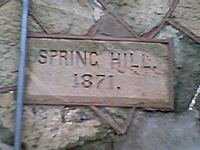 Secane was the name of a Native American chief who sold the area to Benjamin Franklin for supplies. Three main roads run through the town, Providence Road, South Avenue and Franklin Avenue, which leads to Kedron Avenue (Route 420). Secane has a population of almost 1000 and was farmland before it was developed into a residential area in the 20th century. It is divided between the municipalities of Ridley Township, Pennsylvania and Upper Darby Township, Pennsylvania and is often confused with Clifton Heights, PA because the two share the same the zip code. Secane is also home to Primos Secane Swim Club, which is named after the two townships it represents.

All content from Kiddle encyclopedia articles (including the article images and facts) can be freely used under Attribution-ShareAlike license, unless stated otherwise. Cite this article:
Secane, Pennsylvania Facts for Kids. Kiddle Encyclopedia.