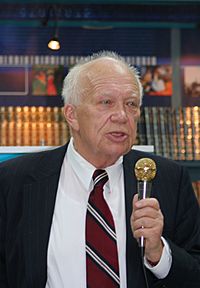 Khrushchev worked in many high-level engineering positions. From 1968 to 1991, he worked at the Control Computer Institute in Moscow.

From the years 1958 to 1968, Khrushchev worked as an engineer, then later as a deputy section head in charge of guidance systems for missile and space design.

He was an advisor to the Cold War Museum. He was a Senior Fellow at the Watson Institute for International and Public Affairs at Brown University.

In July 1999, he became a naturalized American citizen.

All content from Kiddle encyclopedia articles (including the article images and facts) can be freely used under Attribution-ShareAlike license, unless stated otherwise. Cite this article:
Sergei Khrushchev Facts for Kids. Kiddle Encyclopedia.