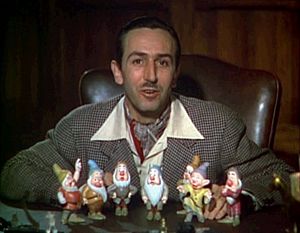 Walt Disney introducing the dwarfs in the trailer of Snow White and the Seven Dwarfs.

The Seven Dwarfs are a group of seven fictional dwarfs that appear in the fairy tale Snow White and others. 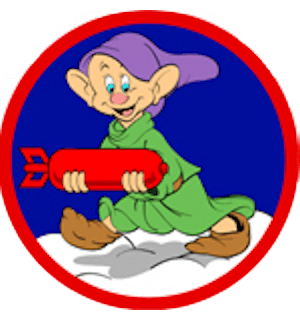 The Seven Dwarfs also appeared in Seven Wise Dwarfs, All Together, The Winged Scourge, and House of Mouse. 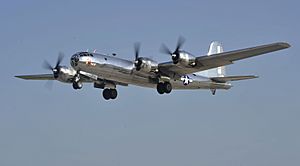 Built during World War II, Doc, a Boeing B-29 Superfortress, was named after one of the Seven Disney Dwarfs.

In the early 2000s, DisneyToon Studios (DTS) joined Disney Consumer Products (DCP) as their internal Disney conglomerate video partner in developing the new Disney franchises. While DCP eyed other potential franchises, DisneyToon looked to the Seven Dwarfs for a male-centric franchise to counterbalance the female-centric Disney Fairies. By 2005, The Seven Dwarfs computer-animated sequel to Snow White was officially underway. Paul and Gaëtan Brizzi was one team that was given an attempt at a movie pitch, which was to follow the Dwarfs in which they trap the villain in the magic mirror and setting it up for Snow White movie. Given the possible demand, Buena Vista Games brought in Obsidian Entertainment, a game developer, who pitched a video game focusing on the Dwarfs' similar ancestors. DTS executives were not feeling that the two franchise launching projects were coming together well enough that they turned to Mike Disa, who worked on the Tinker Bell movie story. Disa and Evan Spiliotopoulos pitched a Lord of the Rings-style epic for the dwarfs while "connecting seamlessly" with the original film, which was given permission to move forward. With interfering managers wanting a tragic back story for Dopey, Disa decided that he could not go forward. Walt Disney Animation Studios chief creative officer John Lasseter about two month later ended production on the film.

The 7D is an American animated television series produced by Disney Television Animation franchise based on Snow White and the Seven Dwarfs. This series is the first Walt Disney Animation Studios classic series. The TV series details the 7D working for Queen Delightful where they protect Jollywood from the Glooms and other threats.

In Sesame Street, there were different versions of the Seven Dwarfs where each of them was made from Anything Muppets.

In Happily Ever After, it was mentioned that the Seven Dwarfs have opened up a mine in the next kingdom. In their place is the Seven Dwarfelles who have received a power based on nature to help out their boss Mother Nature.

The Dwarfelles helped Snow White on her quest to rescue the Prince from the Queen's sorcerer brother Lord Maliss.

The Seven Dwarves appear in the 1990 Snow White film voiced by Jim Cummings and Rob Paulsen.

Happily Ever After: Fairy Tales for Every Child

In Happily Ever After: Fairy Tales for Every Child, the show's adaption of "Snow White" that takes place in the American southwest depicts the Seven Dwarves as seven mystical little men who came from the north to mine turquoise. They consist of:

The Seven Dwarfs appear in the Shrek series.

In Shrek, the Seven Dwarfs appear in the first film carrying Snow White's coffin. When they place the coffin on the table, Shrek says "Oh no no no no! Dead broad off the table!" One of the Dwarfs says "Where else are we supposed to put it? The bed's already been taken." Shrek promptly finds the Big Bad Wolf in his bed.

They are seen again at the start of Shrek 2, giving Shrek a ring engraved with "I love you" in flaming letters for Fiona (in an allusion to the One Ring from The Lord of the Rings).

In Shrek the Third, one of them is given to Fiona as a wedding present (as a babysitter) from Snow White who says she has six more at home.

The Seven Dwarfs are seen at the end of Scared Shrekless when Shrek and Fiona celebrate by egging them.

In Shrek The Musical, one of the dwarfs Grumpy knew that he abandoned his son Farquaad in the woods as a child after his wife The Princess and the Pea falls out of 25 mattresses. However, when the fairytale characters brought Grumpy to Farquaad's wedding, he reveals that he kicked Farquaad out because he was twenty-eight years old and living in his basement.

In Mirror Mirror, the Seven Dwarfs work as Highwaymen and rob from anyone that comes down their way by wearing boots with retractable stilts that make them look taller. The Seven Dwarfs consist of:

The Seven Dwarfs help Snow White to form a resistance against Queen Clementianna.

In the Princesses series by Jim C. Hines, the dwarfs are actually anthropomorphic elemental personifications, summoned by Snow to aid her based on a spell from one of her mother's books. The seven dwarfs represent Earth, Air, Fire, Water, Light, Shadow, and Magic, although the 'Magic' dwarf is essentially a spirit that just inhabits Snow and enhances her power rather than appearing on its own, with the others appearing in some form to represent their element. Although powerful fighters that will serve Snow loyally, the consequences of summoning them is that Snow must 'pay' the spirits with seven years of her life, with the result that she appears to be in her mid-thirties when she is really only in her early twenties. As a result, she has only summoned the dwarves twice, initially calling on their aid to help her defeat her mother before the series began, and summoning them again to help her and her allies defeat her mother's spirit in the first book in the series (she contemplated summoning them against to deal with the ruthless Wild Hunt in Red Riding's Revenge, but was advised against it as the spiritual nature of the hunt meant that nobody could be sure if the dwarves could do anything against them).

Snow White and the Huntsman

The Dwarfs were played by actors without dwarfism who had their faces digitally transmuted onto small bodies, prompting a protest from the Little People of America.

In The Huntsman: Winter's War, Nion returns where he aids Eric the Huntsman in retrieving the Magic Mirror which was stolen before it can be sealed away. They are aided by Nion's half-brother Gryff (portrayed by Rob Brydon) who is a debt collector.

Once Upon a Time

In Once Upon a Time, the Seven Dwarfs (who started out as eight) are on the side of Snow White and go by their Disney names.

There were some other dwarfs that were associated with the Seven Dwarfs:

In the first episode of the final series of The Goodies (which was filmed at ITV), The Goodies did a story set in a fairy tale world where they replaced three of the seven dwarfs (two of them died of exposure and another one was eaten by a gold fish). But they are later found out because of their height. The dwarfs take their names from the Disney film (Sleepy, Happy, and Grumpy) while Graeme and Bill renamed themselves to fit in (Soppy and Gwotty). Only Tim kept his name.

The following is a list of names of the Seven Dwarfs from multiple versions of the Snow White story. There are many adaptations of the story of Snow White, including animation, films, books, plays, and ballet.

All content from Kiddle encyclopedia articles (including the article images and facts) can be freely used under Attribution-ShareAlike license, unless stated otherwise. Cite this article:
Seven Dwarfs Facts for Kids. Kiddle Encyclopedia.