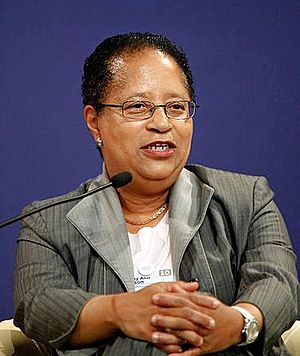 Shirley Ann Jackson (born August 5, 1946) is an American physicist. She is President of Rensselaer Polytechnic Institute. In 1973 she became the first African-American women to get a doctorate degree in nuclear physics. She was also the first to get this degree from the Massachusetts Institute of Technology.

She was named one of the 50 Most Important Women in Science by Discover magazine. In 2007 the National Science Board gave Jackson the Vannevar Bush Award for "a lifetime of achievements in scientific research, education and senior statesman-like contributions to public policy".

All content from Kiddle encyclopedia articles (including the article images and facts) can be freely used under Attribution-ShareAlike license, unless stated otherwise. Cite this article:
Shirley Ann Jackson Facts for Kids. Kiddle Encyclopedia.