Sidney is a city in and the county seat of Richland County, Montana, United States, less than 10 mi (16 km) away from the North Dakota border. The population was 5,191 at the 2010 census. The city lies along the Yellowstone River and is in proximity to the badlands of the Dakotas. Sidney is approximately midway between Glendive, Montana and Williston, North Dakota.

Settlers began arriving in the area in the 1870s, and a post office was established in 1888. Six-year-old Sidney Walters and his parents were staying with Hiram Otis, the local justice of the peace, and Otis decided that Sidney was a good name for the town. The following year, Montana became a state and Sidney was incorporated in 1911. [1]

Sidney was originally part of Dawson County, but became the county seat of Richland County at its inception in 1914.

Agriculture became an important part of the region after the Lower Yellowstone Irrigation Project was completed in 1909. A dam was built on the river south of Glendive, which diverted water from the river into a 115.2 km (71.6 mi) main canal, which runs north-south, parallel to the Yellowstone, irrigating land from Glendive north up to Fairview, where it dumps into the Missouri River. This project irrigates 51,429 acres (208.13 km2) and serves water to 450 farms, according to the manager of the Lower Yellowstone Irrigation Districts.

The area experienced an oil boom and bust in the late 1970s and early 1980s, bringing an influx of people to the town for a short period of time. Around the start of the 21st century, the town started experiencing another surge in oil exploration activity.

The town's museum, the MonDak Heritage Center, was founded in 1967. The museum houses artifacts and archives that detail the history of life in eastern Montana and western North Dakota since the first pioneers arrived in the late 19th century. 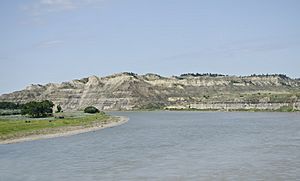 There were 2,304 households of which 28.5% had children under the age of 18 living with them, 46.0% were married couples living together, 8.6% had a female householder with no husband present, 5.2% had a male householder with no wife present, and 40.2% were non-families. 33.7% of all households were made up of individuals and 12.9% had someone living alone who was 65 years of age or older. The average household size was 2.24 and the average family size was 2.85.

All content from Kiddle encyclopedia articles (including the article images and facts) can be freely used under Attribution-ShareAlike license, unless stated otherwise. Cite this article:
Sidney, Montana Facts for Kids. Kiddle Encyclopedia.