Dawson County is a county located in the U.S. state of Montana. As of the 2010 United States Census, the population was 8,966. Its county seat is Glendive.

Dawson County is one of the older counties of the state. It was created January 15, 1869 from the northern half of the original Big Horn County. The namesake of the county is Major Andrew Dawson, manager of the Fort Benton Trading Post for the American Fur Company from 1856 to 1864.

Dawson County is located in the extreme eastern portion of Montana, about fifteen to twenty miles west of the Dakota line.

The principal sources of the water supply in Dawson County are the Yellowstone River, which bisects the southeastern half of the county, and the Redwater River, which flows through its extreme northwest townships. Numerous large and small creeks are tributary to these streams, furnishing abundant and accessible facilities not only for watering livestock, but also for small individual irrigation enterprises, and water conservation projects. In the upper bench lands, artesian well irrigation has received considerable attention.

In 1920, Dawson County was traversed by the National Parks Highway or Red Trail, the Black Trail, the Green Trail and the Blue Trail, all of which passed through Glendive. 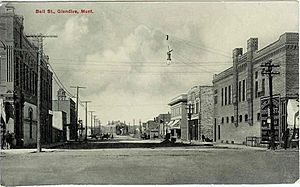 Dawson County is known for its dryland grain, coal mines and gas and oil wells. There are 522 current farms and ranches, and 296 commercial businesses.

Lying in the heart of the western third of the Fort Union region, Dawson County is plentifully supplied with lignite coal. Local natural gas has supplied Glendive since at least 1920. Excellent clays for pottery and brick-making are also found in the county.

From early days, Dawson County was known as a splendid stock county, because of the native cover of a heavy and nutritious grass. Unlike some other parts of the state, the livestock industry did not die out. In the early 20th century, the county was known for pure-bred stock raising, dairying, and the production of hogs and poultry.

While there is some broken land around the Sheep Bluffs, in the northwestern part of the county, and east of the Yellowstone, smooth prairies and rolling land predominated in the county, making conditions excellent for farming purposes. The dark sandy loam soil, with a heavy clay subsoil, was a big producer.

The principal crops in the early years of the 20th century were barley, oats and wheat. Sixty per cent of the land was tillable, and the remainder afforded good grazing. As of 1920, the headgates of the Lower Yellowstone Irrigation Project, which irrigated approximately 90,000 acres, were located at Intake, in Dawson County, and further irrigation was planned. Unirrigated land was also producing excellent crops, with up to 400 bushels of potatoes in one acre of unirrigated land. In 1915, Dawson County won first and second prizes on Northwestern Dent corn at the St. Paul Corn Show, and in December of the following year, at the First National Corn Show, held at the same city, took first and second prizes and three third prizes. In 1920, it was estimated that the acreage planted in corn in Dawson County alone was as great as the corn acreage for the entire state in 1910.

All content from Kiddle encyclopedia articles (including the article images and facts) can be freely used under Attribution-ShareAlike license, unless stated otherwise. Cite this article:
Dawson County, Montana Facts for Kids. Kiddle Encyclopedia.