Some authorities include the Chisos and other mountains of Big Bend National Park as part of the Sierra del Carmen. From the Mexican side of the Rio Grande, the Sierra runs southeast for about 45 miles (72 km) to 28’ 40° North latitude and a maximum width of about 20 miles (32 km). Elevations increase toward the south culminating in several peaks with heights of more than 8,000 feet (2,400 m) and a maximum altitude of 8,920 feet (2,720 m). The western side of the Sierra del Carmen features a high limestone escarpment that formed along a fault line. 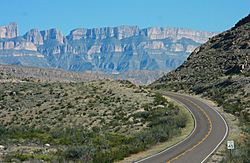 The Sierra del Carmen seen from the Big Bend in Texas.

The Sierra del Carmen is an isolated range, a sky island, that rises above the Chihuahua Desert. Because of its elevation, higher than any other mountain ranges in the Bolson de Mapimi, the Sierra del Carmen is home to flora and fauna that are more characteristic of the mountains of the western United States than Mexico. At lower elevations, desert vegetation surrounds the higher elevations. Oak and oak-pine forests are found at elevations of 4,400 to 5,900 feet (1,300 to 1,800 m). Above 5,900 feet, the forest is dominated by pine. Conifer species such as Douglas fir, Engelmann spruce, and Durango fir are found at elevations of 6,600 feet (2,000 m) or more.

The Sierra del Carmen is home to 446 species of birds, 3,600 species of insects, more than 1,500 plant species, and 75 mammals. Among the mammals are American black bear, beaver, and cougar. A small subspecies of white-tail deer, the Carmen Mountains white-tailed deer is found in the Sierra. Extirpated from the region and not at present found in the Sierra are pronghorn and the Mexican wolf.

The climate of the Sierra del Carmen is arid to semi-arid with more humid conditions at higher elevations. Annual precipitation is between 10 and 20 inches (250 and 510 mm). Most precipitation is in the summer; snow often falls in the winter. The nearest weather station representative of the Sierra del Carmen is in Big Bend National Park which shares a similar climate.

The climatic classification of this station is Bsk (Koppen) or Bsal (Trewartha).

The isolation of the Sierra del Carmen and its relatively undisturbed environment has led to conservation efforts in Mexico and jointly with the United States. Much of the Sierra del Carmen has been declared by the government of Mexico the Maderas del Carmen Flora and Fauna Protected Area, a designation which allows many economic activities and private land holdings to continue to exist within the boundaries. The protected area comprises 520,000 acres (210,000 ha). The Maderas del Carmen is part of a bi-lateral conservation project called the El Carmen—Big Bend Conservation Corridor Initiative which includes contiguous land designated for conservation on both sides of the border totaling more than 3 million acres (1.2 million ha), an area almost as large as the U.S. state of Connecticut. In 2005, Maderas del Carmen became the first designated Wilderness area in Latin America.

The Maderas del Carmen Protected Area was created in 1994, although conservation efforts were initially slowed because the land was privately owned, either in large ranches or in the collective farms called ejidos in Mexico. In 2000 a Mexican corporation, Cementos de Mexico (CEMEX) began to purchase lands for conservation in the region. On CEMEX lands livestock and fences were removed and native vegetation encouraged. By 2006, CEMEX owned 195,000 acres (79,000 ha) in or near the Maderas del Carmen and managed another 62,500 acres (25,300 ha).

One of the important characteristics of the Sierra del Carmen is that it functions as a "corridor" enabling wildlife to migrate north and south. In the late 1980s the corridor between the Sierra and the mountains of west Texas enabled the black bear to disperse northward and reestablish itself in Big Bend National Park. The black bear had been extirpated from west Texas in the 1950s.

In other initiatives, in 2000, CEMEX in cooperation with conservation organizations in Mexico and Texas began breeding and releasing to the wild bighorn sheep which had been absent from the Sierra del Carmen for more than 50 years.

On October 24, 2011, Mexico and the United States signed an agreement for "Cooperative Action for Conservation in the Big Bend-Rio Bravo Natural Area of Binational Interest."

All content from Kiddle encyclopedia articles (including the article images and facts) can be freely used under Attribution-ShareAlike license, unless stated otherwise. Cite this article:
Sierra del Carmen Facts for Kids. Kiddle Encyclopedia.