A special notation is used to describe sigmatropic shifts. Each of the carbon atoms on the backbone of the molecule are assigned a position number. Sigmatropic rearrangements are described by an order term [i,j]. This means the migration of a σ-bond adjacent to one or more π systems to a new position (i-1) and (j-1) atoms removed from the original location of the σ-bond. When the sum of i and j is an even number, this is an indication of the involvement of a neutral, all C atom chain. An odd number suggests that there is a charged C atom or of a heteroatom lone pair replacing a carbon-carbon double bond. Thus, [1,5] and [3,3] shifts become [1,4] and [2,3] shifts with heteroatoms, while preserving symmetry considerations. Hydrogens are omitted in the third example for clarity. 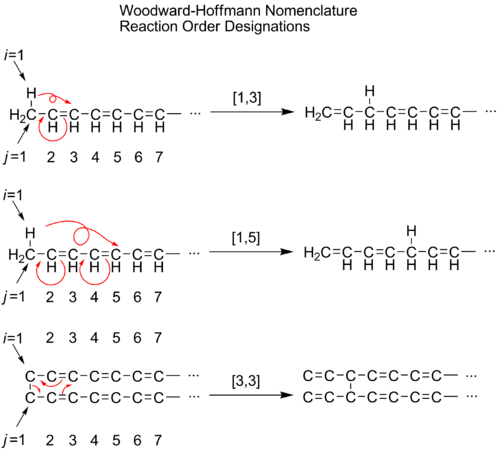 Here is a way to find the order of a given sigmatropic rearrangement. The first step is to give numbers to each atom starting with the atoms of the bond being broken as atom 1. Chemists count the atoms in each direction from the broken bond to the atoms that form the new σ-bond in the product. The numbers that correspond to the atoms forming the new bond are then separated by a comma and placed within brackets. This creates the sigmatropic reaction order descriptor. 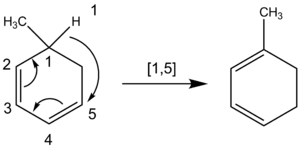 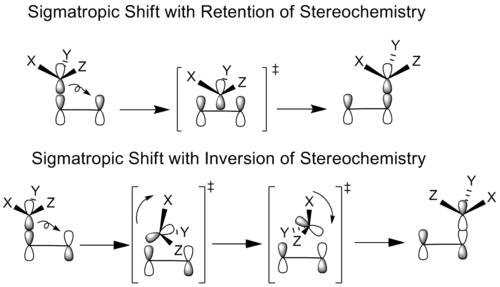 In a thermal [1,3] hydride shift, a hydride moves three atoms. The Woodward-Hoffmann rules dictate that it would proceed in an antarafacial shift. Although such a shift is symmetry allowed, the Mobius topology required in the transition state prohibits such a shift. It is geometrically impossible. This is why enols do not isomerize without an acid or base catalyst.

Thermal alkyl [1,3] shifts, similar to [1,3] hydride shifts, must proceed antarafacially. The geometry of the transition state is prohibitive. But an alkyl group, due to the nature of its orbitals, can invert its geometry and form a new bond with the back lobe of its sp3 orbital. This reaction will result a suprafacial shift. These reactions are still not common in open chain systems because of the highly ordered nature of the transition state. So, the reactions work better in cyclic molecules. 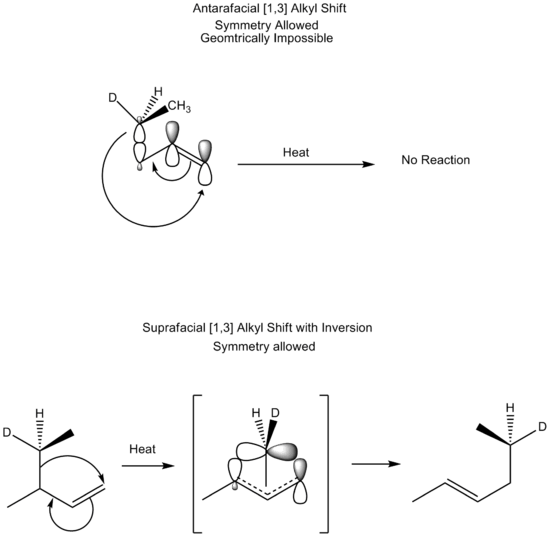 Photochemical [1,3] shifts should be suprafacial shifts; however, most are non-concerted because they proceed through a triplet state (that is, they have a diradical mechanism, to which the Woodward-Hoffmann rules do not apply).

A [1,5] shift involves the shift of 1 substituent (-H, -R or -Ar) down 5 atoms of a π system. Hydrogen has been shown to shift in both cyclic and open chain systems at temperatures at or above 200 ˚C. These reactions are predicted to proceed suprafacially, by a Huckel-topology transition state.

In contrast to hydrogen [1,5] shifts, there have never been any observed [1,5] alky shifts in an open-chain system. Chemists have determined rate preferences for [1,5] alkyl shifts in cyclic systems: carbonyl and carboxyl> hydride> phenyl and vinyl>> alkyl.

Alkyl groups undergo [1,5] shifts very poorly and usually require high temperatures. However, for cyclohexadienes, the temperature for alkyl shifts is not much higher than that for carbonyls, the best migratory group. A study showed that this is because alkyl shifts on cyclohexadienes proceed through a different mechanism. First the ring opens, followed by a [1,7] shift, and then the ring reforms electrocyclically:

This same mechanistic process is seen below, without the final electrocyclic ring-closing reaction, in the interconversion of lumisterol to vitamin D2.

[1,7] sigmatropic shifts are predicted by the Woodward-Hoffmann rules to proceed in an antarafacial fashion, by a Mobius topology transition state. An antarafacial [1,7] shift is observed in the conversion of lumisterol to vitamin D2, where following an electrocyclic ring opening to previtamin D2, a methyl hydrogen shifts.

Bicyclic nonatrienes also undergo [1,7] shifts in a so called walk rearrangement, which is the shift of divalent group, as part of a three-membered ring, in a bicyclic molecule. 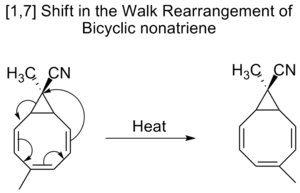 The ortho-Claisen rearrangement involves the [3,3] shift of an allyl phenyl ether to an intermediate which quickly tautomerizes to an ortho-substituted phenol.

The Cope rearrangement is an extensively studied organic reaction involving the [3,3] sigmatropic rearrangement of 1,5-dienes. It was developed by Arthur C. Cope. For example 3,4-dimethyl-1,5-hexadiene heated to 300 °C yields 2,6-octadiene.

The Oxy-Cope rearrangement a hydroxyl group is added at C3 forming an enal or enone after Keto-enol tautomerism of the intermediate enol:

The Fischer indole synthesis is a chemical reaction that produces the aromatic heterocycle indole from a (substituted) phenylhydrazine and an aldehyde or ketone under acidic conditions. The reaction was discovered in 1883 by Hermann Emil Fischer.

Several reviews have been published.

Similar to [3,3] shifts, the Woodward-Hoffman rules predict that [5,5] sigmatropic shifts would proceed suprafacially, Huckel topology transition state. These reactions are rarer than [3,3] sigmatropic shifts, but this is mainly a function of the fact that molecules that can undergo [5,5] shifts are rarer than molecules that can undergo [3,3] shifts.

The migration of a divalent group, such as O, S, NR or CR2, which is part of a three-membered ring in a bicyclic molecule, is commonly referred to as a walk rearrangement. This can be formally characterized according to the Woodward-Hofmann rules as being a (1, n) sigmatropic shift. An example of such a rearrangement is the shift of substituents on tropilidenes (1,3,5-cycloheptatrienes). When heated, the pi-system goes through an electrocyclic ring closing to form bicycle[4,1,0]heptadiene (norcaradiene). Thereafter follows a [1,5] alkyl shift and an electrocyclic ring opening.

Proceeding through a [1,5] shift, the walk rearrangement of norcaradienes is expected to proceed suprafacially with a retention of stereochemistry. Experimental observations, however, show that the 1,5-shifts of norcaradienes proceed antarafacially. Theoretical calculations found the [1,5] shift to be a diradical process, but without involving any diradical minima on the potential energy surface.

All content from Kiddle encyclopedia articles (including the article images and facts) can be freely used under Attribution-ShareAlike license, unless stated otherwise. Cite this article:
Sigmatropic reaction Facts for Kids. Kiddle Encyclopedia.