Signal Hill is a hill which overlooks the city of St. John's, Newfoundland and Labrador, Canada. Mostly a National Historic Site, adjacent to is the largely encaved museum of Johnson Geo Centre and its associated park. The highest point, Ladies' Lookout, above Cabot Tower, is 167 metres (548 ft) high. The community of The Battery lies on the slope of the hill overlooking the Harbour. On 12 December 1901, the first transatlantic wireless transmission was received by Guglielmo Marconi, to its abandoned fever hospital.

Due to its strategic placement overlooking the Narrows, the only entrance to the harbor, fortifications date back to the mid 17th century.

Memorial University of Newfoundland and Labrador has a campus on the lower slopes, in the former Battery Hotel, and is also now the owner of the Johnson Geo Centre. 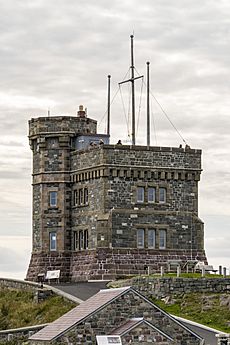 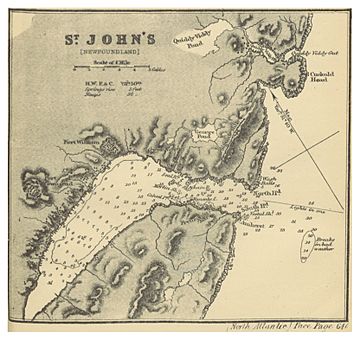 The final battle of the Seven Years' War in North America was fought in 1762 at the Battle of Signal Hill, in which the French surrendered St. John's to a British force under the command of Lt. Colonel William Amherst. Lt. Colonel Amherst renamed what was then known as "The Lookout" as "Signal Hill," because of the signalling that took place upon its summit from its flagmast. Flag communication between land and sea would take place there from the 17th century until 1960.

Signal Hill was designated as the citadel for St. John's during its first construction period in the late 18th century.

During the 19th century, Signal Hill was manned specifically during the Napoleonic Wars and the American Civil War. A second construction period in Signal Hill's history saw the construction of the Queen's Battery Barracks, which has been completely restored to the period of 1862.

Construction on Cabot Tower began in 1897 to commemorate both Queen Victoria's Diamond Jubilee in 1897 and the 400th anniversary of John Cabot's landfall which took place in 1497. The building was declared officially open in 1900. The practical uses of the building were flag mast signalling, and a Marconi wireless station which has since been moved to St. John's International Airport.

On 12 December 1901, the first transatlantic wireless transmission was received by Guglielmo Marconi in the abandoned fever and diphtheria hospital, which has since been destroyed by fire. The transmission, in Morse code, originated from his Poldhu Wireless Station, Cornwall, UK.

The United States maintained anti-aircraft guns on the hill during World War II. A battery of two 8-inch M1888 railway guns was emplaced there on 1 May 1941, but relocated to Red Cliff circa 1943. Signal Hill was also one of three prepared sites for a battery of two 155 mm guns on Panama mounts. 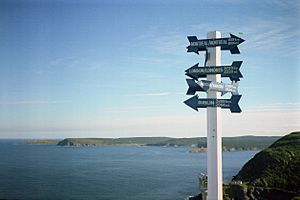 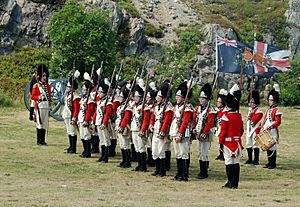 Cabot Tower, located at the top of the hill, features exhibits about Guglielmo Marconi and the wireless station that operated in the tower. There is a gift shop, and an amateur radio station VO1AA, which may be operated by visiting amateur radio operators in the summer months. It is sponsored by the Society Of Newfoundland Radio Amateurs. An active amateur radio repeater, VO1AAA 146.790+, is located inside the building and is operational year round. A tourist information radio station, CJSH-FM, also broadcasts from the Signal Hill site.

The visitor centre is open during the tourist season and features interactive exhibits, a film about the site's military and communications history, and the history of St. John's, along with a cafe.

The North Head Trail is located along the edge of St John's Harbour and the sea. The Lady's Lookout Trail descends steeply from Lady's Lookout, above Cabot Tower, the highest point of Signal Hill, to the Burma Road Trail. There is also a short trail to the summit of Gibbet Hill.

The Burma Road trail, built by American servicemen who manned coastal batteries on Signal Hill during the Second World War, runs from George's Pond, Signal Hill Road to Cuckold's Cove, close to Quidi Vidi. Along it there were barracks.

There are Eight looped trails in the Johnson GEO Park with informative outdoor displays. Stoneworks and panels explain the local geological formations, botanical species, and traditional uses of stone. Completed in 2007, the park surrounds the Geo Centre and includes Deadman's Pond acres the road. Both the Geo Park's and Signal National Historic Park's trails are linked to the Grand Concourse walkway system.

All content from Kiddle encyclopedia articles (including the article images and facts) can be freely used under Attribution-ShareAlike license, unless stated otherwise. Cite this article:
Signal Hill, St. John's Facts for Kids. Kiddle Encyclopedia.