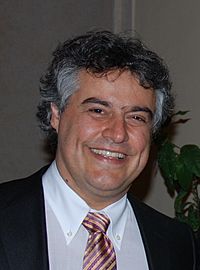 Silvio Sergio Bonaccorsi Barbato (born Candeias (Minas Gerais) (Brazil), 11 May 1959; died either in or over the mid-Atlantic Ocean, on the Air France Flight 447, 1 June 2009) was an Italian-Brazilian opera conductor and composer.

He studied conducting at the University of Brasília and composition in Milan. He started his conducting career when he was 25 with a performance of Puccini's opera Tosca. He also helped to bring other operas to places in the middle of the Brazilian rainforest. He directed the music in a film about the Brazilian composer Heitor Villa-Lobos called Uma Vida di Paixao (A Life of Passion). In Rio de Janeiro he conducted operas which included world-famous singers such as Montserrat Caballé, Robert Alagna and Angela Gheorghiu. He also conducted choral works such as Berlioz's L'enfant du Christ.

Barbato was travelling to Kiev where he was due to conduct and teach. He was on board an Air France aeroplane flying from Rio de Janeiro to Paris early on 1 June 2009 when it mysteriously crashed over the Atlantic Ocean.

All content from Kiddle encyclopedia articles (including the article images and facts) can be freely used under Attribution-ShareAlike license, unless stated otherwise. Cite this article:
Silvio Barbato Facts for Kids. Kiddle Encyclopedia.