Simarouba glauca is an obsolete name of Simarouba amara, a flowering tree that is native to Florida, South America, and the Caribbean. Common names include paradise-tree, dysentery-bark, bitterwood and Lakshmi Taru. Its seeds produce an edible oil. The tree is well suited for warm, humid, tropical regions. Its cultivation depends on rainfall distribution, water holding capacity of the soil and sub-soil moisture. It is suited for temperature range of 10 to 40 °C (50 to 104 °F). It can grow at elevations from sea level to 1,000 m (3,300 ft). It grows 40 to 50 ft (12 to 15 m) tall and has a span of 25 to 30 ft (7.6 to 9.1 m). It bears yellow flowers and oval elongated purple colored fleshy fruits.

It can be propagated from seeds, grafting and tissue culture technology. Fruits are collected in the month of April / May, when they are ripe and then dried in sun for about a week. Skin is separated and seeds are grown in plastic bags to produce saplings. Saplings 2 to 3 months old can be transplanted to a plantation. 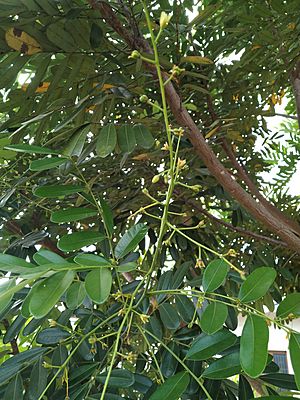 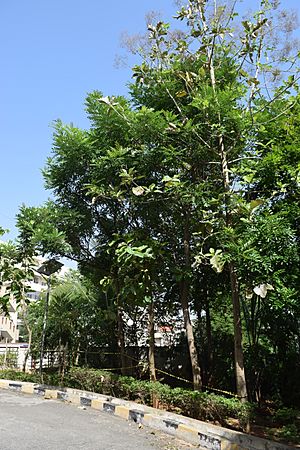 The wood is generally insect resistant and is used in the preparation of quality furniture, toys, matches, as pulp (in paper making). It can be also used for industrial purposes in the manufacture of biofuel, soaps, detergents, lubricants, varnishes, cosmetics, and pharmaceuticals.

Though there is some research claiming that Simarouba is effective for treating certain diseases, there seems to be insufficient evidence of curing diarrhea, malaria, edema, fever and stomach upset. Known in India as Lakshmi Taru, the extracts from parts of the tree have been claimed to possess potent anticancer properties. However, to date, no systematic research using phytochemicals isolated from Simarouba glauca has been carried out to explore the molecular mechanisms leading to cancer cell death. Simarouba extracts are known to be effective only on specific types of human cancer cell lines and tests conducted were invitro. Whether the same effect would be observed under invivo conditions, depends on bioavailability and bioaccessibility, hence Simarouba as an alternative cure for cancer remains unproven.

The tree forms a well-developed root system and dense evergreen canopy that efficiently checks soil erosion, supports soil microbial life, and improves groundwater position. Besides converting solar energy into biochemical energy all round the year, it checks overheating of the soil surface all through the year and particularly during summer. Large-scale planting in wastelands facilitates wasteland reclamation, converts the accumulated atmospheric carbon dioxide into oxygen and contributes to the reduction of greenhouse effect or global warming.

All content from Kiddle encyclopedia articles (including the article images and facts) can be freely used under Attribution-ShareAlike license, unless stated otherwise. Cite this article:
Simarouba glauca Facts for Kids. Kiddle Encyclopedia.