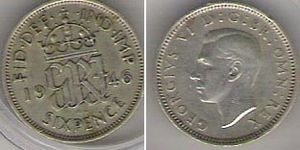 The sixpence (6d;), sometimes known as a tanner or half-shilling was a British coin. It was worth 6 pennies or 2+1⁄2 new pence. It has not been produced since 1970. The coin was first minted in silver during the reign of Edward VI of England. From 1947 it was made from cupronickel. Following decimalisation, on 15 February 1971, the coin remained in circulation but was reduced in value. It was taken out of circulation in 1980.

All content from Kiddle encyclopedia articles (including the article images and facts) can be freely used under Attribution-ShareAlike license, unless stated otherwise. Cite this article:
Sixpence (British coin) Facts for Kids. Kiddle Encyclopedia.