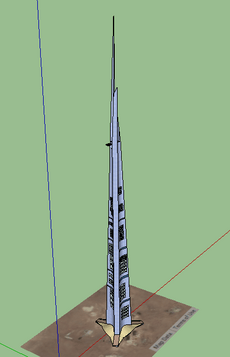 The under-construction Jeddah Tower and Google imagery used for it, designed with Sketchup Make 2013

SketchUp is a 3D modelling program made for architects, engineers, and moviemakers. It is easier to use than most programs used for three dimensional drawings. SketchUp was created by the company @Last Software and released in August 2000. In 2006, @Last Software was bought by Google. They released SketchUp6 in January 2007. SketchUp6 can use add-ons that let things build with the program be made into files that can be used with Google Earth. In 2012, SketchUp was bought by Trimble Navigation.

All content from Kiddle encyclopedia articles (including the article images and facts) can be freely used under Attribution-ShareAlike license, unless stated otherwise. Cite this article:
SketchUp Facts for Kids. Kiddle Encyclopedia.