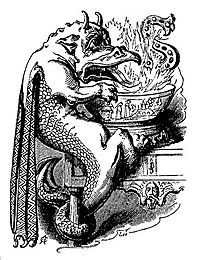 Fanciful image of a dragon playing Snap-dragon, from Robert Chambers' Book of Days (1879)

Snap-dragon (also known as Flap-dragon, Snapdragon, or Flapdragon) was a parlour game popular from about the 16th century. It was played during the winter, particularly on Christmas Eve. Brandy was heated and placed in a wide shallow bowl; raisins were placed in the brandy which was then set alight. Typically, lights were extinguished or dimmed to increase the eerie effect of the blue flames playing across the liquor. The game as described in Samuel Johnson's Dictionary of the English Language (1755) as "a play in which they catch raisins out of burning brandy and, extinguishing them by closing the mouth, eat them." According to an article in Richard Steele's Tatler magazine, "the wantonness of the thing was to see each other look like a demon, as we burnt ourselves, and snatched out the fruit." Snap-dragon was played in England, Canada, and the United States, but there is insufficient evidence of the practice in Scotland or other countries.

The liquid used in snap-dragon was typically brandy, although similar flammable liquors could also be used. Traditionally, raisins were the treat to be snatched; William Sandys specifies Málaga raisins. Other treats could also be used. Of these, almonds were the most common alternative or addition, but currants, candied fruit, figs, grapes, and plums also featured. Salt could be sprinkled in the bowl. The low bowl was typically placed in the middle of a table to prevent damage from the inevitable splashes of burning brandy. In one variation a Christmas pudding is placed in the centre of the bowl with raisins around it.

Most sources describe snap-dragon as a Christmas tradition, but Blain suggests that in the United States it was played at Halloween, and Platt notes:

The game was one particular to Halloween or Christmas or Twelfth Night; I will not specify which, because in the first place I do not know, and in the second place if I were to make a mistake I would be held up to ridicule and all my statements overthrown

There were several other traditions surrounding the game of snap-dragon. Mary F. Blain describes the belief that the person who snatches the most treats out of the brandy will meet their true love within a year. In another tradition, one of the raisins contains a gold button and becomes "the lucky raisin". The person who fishes the raisin out can claim a reward or boon (favor) of their choosing. In the short story Master Sandy's Snapdragon by Elbridge S. Brooks, snap-dragon is played in the royal household of James I of England. Young Prince Charles (later Charles I of England) catches the lucky raisin, and as his favor, requests the freedom of Walter Raleigh.

According to Robert Chambers' Book of Days (1879) the game was accompanied by a chant:

Here he comes with flaming bowl,
Don't he mean to take his toll,
Snip! Snap! Dragon!

Take care you don't take too much,
Be not greedy in your clutch,
Snip! Snap! Dragon!

With his blue and lapping tongue
Many of you will be stung,
Snip! Snap! Dragon!

For he snaps at all that comes
Snatching at his feast of plums,
Snip! Snap! Dragon!

But Old Christmas makes him come,
Though he looks so fee! fa! fum!
Snip! Snap! Dragon!

Don't 'ee fear him but be bold –
Out he goes his flames are cold,
Snip! Snap! Dragon!

In the English play Lingua (1607) the practice is said to come from classical antiquity: "When Hercules had killed the flaming dragon of Hesperia with the apples of that orchard, he made this fiery meat; in memory whereof he named it Snapdragon." Brooks' Master Sandy's Snapdragon suggests another mythical origin, relating the fire of snap-dragons to Saint George and the dragon. Chambers suggests that it hearkens back to druidic fire-worship. According to the Oxford English Dictionary entry for flapdragon, "the original sense may have been identical with a dialectal sense of snapdragon, viz. a figure of a dragon's head with snapping jaws, carried about by the mummers at Christmas; but of this there is no trace in our quot[ation]s".

Michael Faraday, in his essay The Chemical History of a Candle (1860), suggested that the raisins in snap-dragon act like miniature wicks. The concept is similar to that of burning brandy on top of Christmas puddings – the brandy is burning, but is not burning at a high enough temperature to consume the raisins. Nevertheless, children often burnt their hands or mouths playing this game, which may have led to the practice mostly dying out in the early 20th century, while persisting in some families.

All content from Kiddle encyclopedia articles (including the article images and facts) can be freely used under Attribution-ShareAlike license, unless stated otherwise. Cite this article:
Snap-dragon (game) Facts for Kids. Kiddle Encyclopedia.