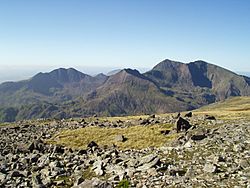 The Snowdon Massif is one of the three mountain groups in Snowdonia, north Wales, to include mountains over 3,000 feet (914 m) high. It occupies the area between Beddgelert, Pen-y-Pass and Llanberis. It is surrounded by the Glyderau to the north-east, Moel Siabod to the east, the Moelwynion to the south, Moel Hebog, the Nantlle Ridge and Mynydd Mawr to the west, and by flatter land leading down to Caernarfon and the Menai Strait to the north-west.

The Snowdon Horseshoe is the name given to the semi-circular ring of ridges and peaks on Snowdon's eastern side, i.e. facing down Dyffryn Mymbyr towards Capel Curig. The peaks in the Horseshoe are those of Y Lliwedd, Snowdon, Garnedd Ugain and Crib Goch.

All the peaks listed here are Hewitts; those marked with an asterisk are also Marilyns. 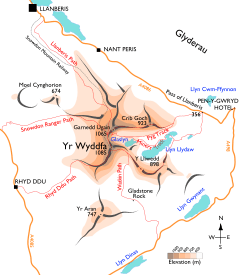 All content from Kiddle encyclopedia articles (including the article images and facts) can be freely used under Attribution-ShareAlike license, unless stated otherwise. Cite this article:
Snowdon Massif Facts for Kids. Kiddle Encyclopedia.