Snowville is a town in Box Elder County, Utah, United States. The population was 167 at the 2010 census.

According to the United States Census Bureau, the town has a total area of 1.5 square miles (4.0 km²), all land.

According to the Köppen Climate Classification system, Snowville has a semi-arid climate, abbreviated "BSk" on climate maps.

There were 59 households, out of which 47.5% had children under the age of 18 living with them, 62.7% were married couples living together, 10.2% had a female householder with no husband present, and 22.0% were non-families. 20.3% of all households were made up of individuals, and 10.2% had someone living alone who was 65 years of age or older. The average household size was 3.00 and the average family size was 3.52. 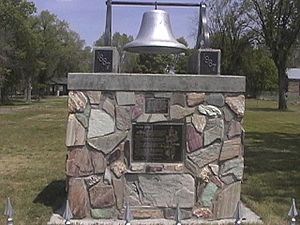 Curlew Valley, named after the curlew snipe that nests there, extends from Snowville, Utah, to the Idaho towns of Stone and Holbrook. The first recorded white men were Peter Skene Ogden's large party of trappers that camped on Deep Creek December 27, 1828.

Some of the discharged members of the Mormon Battalion, on their way home from California to Salt Lake City on September 18, 1848, camped on Deep Creek and also in a cave one mile (1.6 km) east called Hollow Rock.

The beginning of Deep Creek is a large spring at Holbrook which runs through the center of the valley and has never varied even in dry years. About one mile (1.6 km) southwest is Rocky Ford, where the pioneers were able to pass on solid rock.

In 1869 William Robbins, Thomas Showell, and William M. Harris settled at the Curlew Sinks, ten miles (16 km) west of here, where Deep Creek sinks into the ground. The old pioneer trail and the stage line went through their ranch.

The first townsite in the Curlew Valley was Snowville. Settled at the direction of Brigham Young and named in honor of Lorenzo Snow an apostle at the time but later to become the President of The Church of Jesus Christ of Latter-day Saints 1898–1901. Snowville was laid out August 14, 1878.

All content from Kiddle encyclopedia articles (including the article images and facts) can be freely used under Attribution-ShareAlike license, unless stated otherwise. Cite this article:
Snowville, Utah Facts for Kids. Kiddle Encyclopedia.