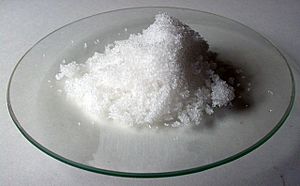 Sodium nitrate, also known as caliche, Chile saltpeter, and soda niter, is a chemical compound. It contains sodium and nitrate ions. Its chemical formula is NaNO3.

It can dissolve in water very easily. It is an oxidizing agent. It is a white crystalline solid.

It is found in very dry areas. If it was wet, then the sodium nitrate would dissolve. But it is normally made artificially by reacting sodium hydroxide and nitric acid. Chile used to have much sodium nitrate naturally in the very dry Atacama Desert. It is found in small amounts in leafy green vegetables.

It is used to supply nitrogen to the soil. It is also used in making gunpowder. Some other explosives use it. It can be used to make nitric acid by reaction with sulfuric acid. It is used in rockets and smoke bombs. Sometimes it can be a food preservative.

All content from Kiddle encyclopedia articles (including the article images and facts) can be freely used under Attribution-ShareAlike license, unless stated otherwise. Cite this article:
Sodium nitrate Facts for Kids. Kiddle Encyclopedia.