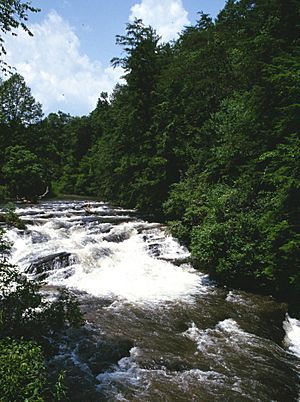 The Soque River near Batesville, Georgia

The Soque River (Cherokee: ᏐᏈ) (Soquee River per 1972 Board on Geographic Names decision) and its watershed are located entirely within the county boundaries of Habersham County in northeast Georgia. The Soque is a tributary of the Chattahoochee River. Portions of the river run along State Route 197.

A non-profit organization the Soque River Watershed Association was formed in 1998 to protect and restore the Soque River, its tributaries and watershed. The membership based organization hosts events, clean-ups and implements sustainability projects such as construction of a Clarkesville Greenway, cattle fencing projects, streambank restoration, and innovative stormwater management.

Soque River took its name from Soque (or Sakwiyi), a Cherokee village which once stood on its banks.

Sub-basins of the Soque River

The Soque River Watershed is made up of 7 watershed sub-basins. From North to South they include: 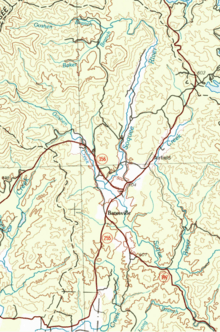 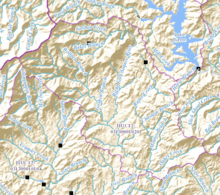 Map showing the headwaters of the Soque River and its sub-watershed (outlined in pink), and Raper Creek

All content from Kiddle encyclopedia articles (including the article images and facts) can be freely used under Attribution-ShareAlike license, unless stated otherwise. Cite this article:
Soque River Facts for Kids. Kiddle Encyclopedia.