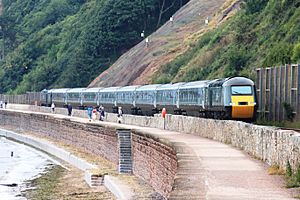 The South Devon Railway sea wall is situated on the south coast of Devon in England. A footpath runs alongside the railway between Dawlish Warren and Dawlish, and another footpath forms a continuation to the sea front promenade at Teignmouth. Both these form part of the South West Coast Path.

The South Devon Railway was built to the designs of Isambard Kingdom Brunel and takes a route from Exeter which follows the River Exe to Dawlish Warren, runs beneath the sea cliffs to Teignmouth, and then follows the River Teign to Newton Abbot. It follows tidal waters for about 13 miles, 4 of which are open sea. 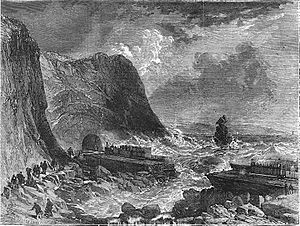 Accident to the South Devon Railway at Dawlish, 1855

The South Devon Railway was amalgamated into the Great Western Railway on 1 February 1876 and the gauge converted to the standard 4 feet 8½ inches after 20 May 1892. A station was opened to serve Dawlish Warren in 1905, all the other stations on the sea wall having opened with the line in 1846.

On the night of 4 February 2014, amid high winds and extremely rough seas, part of the sea wall at Dawlish was breached, washing away around 40 metres (130 ft) of the wall and the ballast under the railway immediately behind. The line was closed. Network Rail began repair work and the line reopened on 4 April 2014. 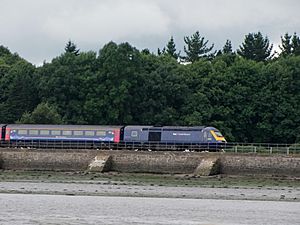 The river comes into view at Turf. The square pond and disturbed ground between the railway and river are the remains of Turf engine house, one of the engine houses used for powering the atmospheric trains. After a short distance the river wall comes alongside the railway at Powderham. After passing the railway then runs between the river and the deer park of Powderham Castle, to Starcross railway station, situated in the middle of Starcross village. Opposite the pier for the ferry to Exmouth is the Starcross engine house.

A little farther along the river, the railway crosses the mouth of Cockwood harbour. Near here was the 1,285 feet long Exe Bight Pier, in use from 1869 for about ten years. On the opposite side of the river trains can sometimes be seen near Lympstone Commando railway station. 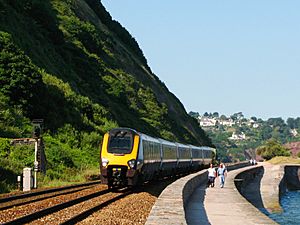 On leaving Dawlish Warren the railway comes onto the sea wall proper with the walkway alongside, although it quickly enters the short and deep cutting at Langstone Rock. Emerging above the beach, views can be had towards Torbay.

A footpath, which is mostly level with the track, follows the railway as far as the Kennaway Tunnel at Dawlish. Just before reaching Dawlish railway station is a footbridge at Coastguard's Cottage. This was used by the railway during its construction and then sold to the coastguard; their boat house is at the top of the beach next to the footbridge. The town of Dawlish can be seen off to the right from Colonnade Viaduct at the other end of the station.

The line now enters its first tunnel, Kennaway, beneath Lea Mount, beyond which is Coryton beach, the farthest point accessible by the sea wall footpath from Dawlish. The Coryton tunnel leads to the next beach, Shell Cove, accessible by foot only via the shore at very low tide or by a private path from the clifftop. The railway then passes through Phillot Tunnel and Clerk's Tunnel, emerging onto a section of sea wall at Breeches Rock before diving into Parson's Tunnel beneath Hole Head. The last two tunnels are named after the Parson and Clerk Rocks, a natural arch in the sea off Hole Head.

Beyond Parson's Tunnel is a short viaduct across Smugglers Lane and then the footpath resumes for the final stretch past Sprey Point to the cutting at Teignmouth Eastcliff. On the landward side of the railway near Sprey Point can be seen the remains of a lime kiln used during the construction of the line.

After passing through Teignmouth railway station, the line continues through a cutting to emerge behind the busy Teignmouth Harbour, after which the railway resumes its course alongside the water, the River Teign. The cuttings on both sides of the station used to be tunnels, but they were opened out between 1879 and 1884.

After going under the Shaldon Bridge and passing a boat yard on the site of Teignmouth gas works, the line follows the river past the small promontories at Flow Point, Red Rock, and Summer House, before passing through two small cuttings and crossing Hackney Marshes near the race course to reach Newton Abbot railway station.

Across the river opposite Summer House can be seen the waterside inn at Coombe Cellars. 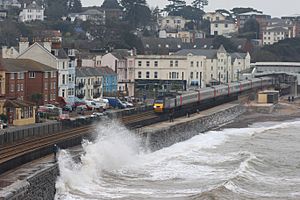 A Class 43 passes waves breaking over the line at Dawlish

During significant high tide levels, trains belonging to the Class 220

Maintenance and the future

Running parallel to the open sea at the base of cliffs for four miles, the sea wall has always been prone to damage during rough weather. In December 1852 a large landslip from the cliffs east of Teignmouth caused the railway to close for four days, and in 1855 and 1859 the sea broke through the line at Teignmouth. There have been many more closures since, caused by landslips from the cliffs and by breaches by the sea, especially in winter. In 1929, the wall between Dawlish and Dawlish Warren was damaged by a storm on Christmas Eve, and there was partial subsidence of the down line. 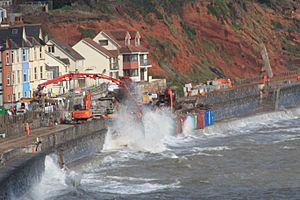 Repairing the breach in the sea wall at Dawlish, February 2014

In 1936 the GWR surveyed an inland deviation termed the Dawlish Avoiding Line, initially in 1936 proposed progressing 1 kilometre (0.62 mi) inland between Exminster and Bishopsteignton, and a 1937 shorter route ending west of Dawlish. After gaining parliamentary approval for the required bill, construction started in Spring 1939, but the advent of World War II brought the project to an end. The GWR was nationalised into British Railways on 1 January 1948, and the land sold. The powers of the associated Act of Parliament only lapsed in 1999.

In 2010 it was stated in Parliament that "in recent years" around £9 million had been invested on keeping the sea wall safe and the cliff faces stable, and that the ongoing maintenance of the sea walls and the adjoining estuaries was costing Network Rail around £500,000 annually. The Under-Secretary of State for Transport reiterated the importance of the line to the economy of South Devon and Cornwall, and confirmed that even if there were to be plans for the building of an alternative inland route in the future, "in our view, it would not be a substitute in any shape or form for the main line along the coast". This is despite the acknowledgement of an inevitable increase in maintenance costs due to rising sea levels.

In 2018 Network Rail put forward a proposal to extend the sea wall farther into the English Channel at Teignmouth, with the wall's new edge passing through Sprey Point. The proposal would involve re-aligning the railway, moving the line further from the cliff and creating a space between them to prevent the railway's being affected by cliff subsidence or collapse. Other elements of the proposal include the improvement of the sea wall between Kennaway Tunnel and Dawlish and the installation of an avalanche shelter-style structure at Horse Cove. Government funding of £80 million to raise the sea wall south of Dawlish station by 2.5 metres (8.2 ft) was approved in February 2019.

All content from Kiddle encyclopedia articles (including the article images and facts) can be freely used under Attribution-ShareAlike license, unless stated otherwise. Cite this article:
South Devon Railway sea wall Facts for Kids. Kiddle Encyclopedia.