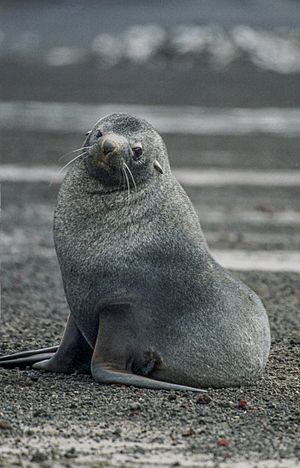 The Southern Powell Island and adjacent islets Specially Protected Area is a 2688 ha site encompassing part of southern Powell Island in the South Orkney Islands of Antarctica. It includes neighbouring Christoffersen, Fredriksen, Michelsen and Grey Islands, along with some other (unnamed) offshore islets. It was designated an Antarctic Specially Protected Area (ASPA 111, formerly SPA 15) because of its biological values as it supports many plants and animals that exemplify the natural ecology of the South Orkney Islands. It is also a breeding site for Antarctic fur seals.

All content from Kiddle encyclopedia articles (including the article images and facts) can be freely used under Attribution-ShareAlike license, unless stated otherwise. Cite this article:
Southern Powell Island and adjacent islets Specially Protected Area Facts for Kids. Kiddle Encyclopedia.