Adiantum capillus-veneris is native to the southern half of the United States from California to the Atlantic coast, through Mexico and Central America, to South America. It is also native to Eurasia, the Levant in Western Asia, and Australasia. There are two disjunct occurrences in the northern part of North America: at Cascade Springs in the Black Hills of South Dakota and Fairmont Hot Springs, British Columbia. In both instances, the warm microclimate created by hot mineral springs permits the growth of the plant far north of its normal range. It is similar in Zvonce spa resort (Звоначка Бања, Zvonačka Banja), near Pirot in Serbia, where hot mineral springs provide adequate heat and humidity for the survival of this species.

It is found in temperate climates from warm-temperate to tropical, where the moisture content is high but not saturating, in the moist, well-drained sand, loam or limestone of many habitats, including rainforests, shrub and woodlands, broadleaf and coniferous forests, and desert cliff seeps, and springs. It often may be seen growing on moist, sheltered and shaded sandstone or limestone formations, generally south-facing in the southern hemisphere, north-facing in the north, or in gorges. It occurs throughout Africa in moist places by streams. On moist sandstone cliffs it grows in full or partial shade, even when unprotected. 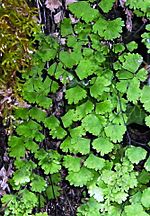 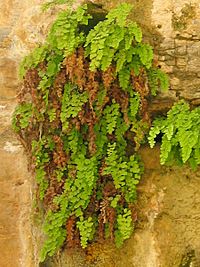 Adiantum capillus-veneris is cultivated and widely available around the world for planting in natural landscape native plants and traditional shade gardens, for outdoor container gardens, and commonly as an indoor houseplant.

The fern is listed as an endangered species in North Carolina (as southern maidenhair-fern) and threatened species in Kentucky (as venus hair fern), due to loss of Appalachian habitat.

This plant is used medicinally by Native Americans. The Mahuna people use the plant internally for rheumatism, and the Navajo people of Kayenta, AZ use an infusion of the plant as a lotion for bumblebee and centipede stings. The Navajo people also smoke it or take it internally to treat mental illness.

In the traditional medicine of Iran, frond infusion of Adiantum capillus-veneris is used for jaundice therapy.

All content from Kiddle encyclopedia articles (including the article images and facts) can be freely used under Attribution-ShareAlike license, unless stated otherwise. Cite this article:
Southern maidenhair fern Facts for Kids. Kiddle Encyclopedia.