Kids Encyclopedia Facts
Not to be confused with Southwark Priory.

Southwick Priory or Our Lady at Southwick was a priory of Augustinian canons founded in Portchester Castle on Portsmouth Harbour and later transferred 2 miles (3.2 km) north to Southwick, Hampshire, England. It ceased at the Dissolution of the Monasteries in 1538.

St Mary's Church within Portchester Castle is all that survives from the original Portchester Priory.

In 1133 Henry I founded a priory of Austin canons in the church of St. Mary, Portchester, within the walls of Portchester Castle. The foundation charter gave to the canons the church of Portchester, timber for fencing, building and fuel, common pasture in the wood of Hingsdon; the large manor of Candover; and a hide of land in 'each of' Southwick and Applestead. By the early part of the thirteenth century, the priory is referred to in charters (held at Lambeth Palace) as Southwick Priory and it is believed to have moved to the site in Southwick c. 1145–1153. 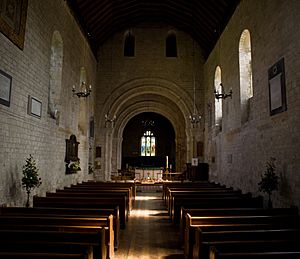 Towards the end of the Middle Ages, the priory became a renowned centre of pilgrimage. In September 1510 Henry VIII passed through Southwick and made an offering of 6s. 8d. at Our Lady of Southwick. In 1538, shortly before the suppression, John Husee, a solicitor and servant of the Lisle family, wrote to Lord Lisle that Pilgrimage saints goeth down apace as Our Lady of Southwick, the Blood of Hales, St. Saviour's and others. And Leland mentions the fame of the pilgrimage to Our Lady of Southwick.

By the dissolution, the priory still holding Preston Candover had gained:

We are bound by the will of William Wykeham to have daily five masses in our church, which have not been said for more than forty years. On 26 May last the Commissioners sat in our place to ascertain the yearly value of our lands, that a tenth part might be assessed according to Act of Parliament, when my master (the prior) delivered them a book of the yearly rents which was not in all points made truly. Also on 22 September last we had a visitation of our house by Dr. Layton, when we had certain injunctions given us to be observed, several of which have been neglected hitherto. I send you this information in discharge of my oath of obedience, and would have done it earlier if I could have had a trusty messenger, for if my master knew of my writing he would convey away the plate, money and jewels in his keeping.

A letter to Lord Lisle of 16 March 1538 stated that the priory was to be suppressed, and that 'Our Lady of Southwick' was taken down. On 7 April 1538 the surrender was signed by the prior, William Norton, and twelve of the canons. James Gunwyn's signature is next to the prior's.

The priory came into the possession of John White, a servant of Thomas Wriothesley, 1st Earl of Southampton. He pulled down the church and converted the prior's lodgings and other parts of the conventual buildings into a private house, known as Southwick Park, which became the family seat of one branch of the Norton family. In October 1551, Mary of Guise Regent of Scotland and mother of Mary, Queen of Scots stayed in the house.

In 1606 John White settled the manor on his daughter and co-heir Honor on her marriage with Sir Daniel Norton, and they came into possession of the manor on the death of John White in the following year.

The church of St Mary at Portchester survives, inside the Roman wall of Porchester Castle, returned to parochial use. It is substantially a Norman building, and hence the one the priory originally used. No trace of the conventual buildings survive above ground except for some drain openings and the marks of the abutment of the cloister against the south wall of the nave.

The house that used materials from the priory was burnt down in 1750 and salvaged for scrap masonry. The site has been occupied since 1838 by Southwick House, which has been home to the Defence School of Policing and Guarding since 2005, and the regimental headquarters of the Royal Military Police since 2007.

Of the priory itself, one section of wall and some earthworks survive. Some remnants of the priory church may survive transferred and reset in the parish church of St James, Southwick. The contiguous estate at Southwick is still intact and is formally referred to as the Southwick Estate.

All content from Kiddle encyclopedia articles (including the article images and facts) can be freely used under Attribution-ShareAlike license, unless stated otherwise. Cite this article:
Southwick Priory Facts for Kids. Kiddle Encyclopedia.