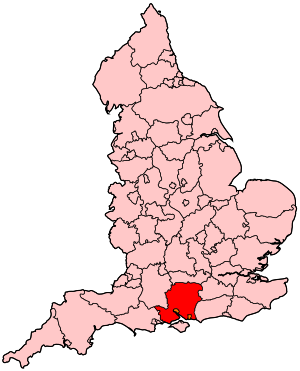 Southwick is a village sharing a civil parish council with the deserted village of Widley in Hampshire, England 1 mile (1.6 km) north of the Portsmouth measured from Portsea Island, and is occupied entirely by tenants in the style of the Middle Ages, where the entirety is wholly owned by the Southwick Estate. There is one exception to this and that is Church Lodge which is in private ownership.

Southwick was initially the site of Southwick Priory, in the 12th century. On the Dissolution of the Monasteries during the Reformation the estate, including the village, was granted to John White. In 1813 a new manor house, Southwick House, was completed. This house was gutted by fire in 1838, but was renovated by 1841. The house and part of the estate was requisitioned by the government during World War II and has been used by various parts of the armed forces, including as HMS Dryad, ever since.

Southwick is rare in that the village is still entirely owned by the Southwick Estate (except for Church Lodge). The most obvious sign of this is that all the houses, except manor houses, have dark red-painted front doors - a condition laid down in the tenancy agreements. The only exceptions to this are the White House, the residence of the vicar and Church Lodge. Church Lodge is the only privately owned house in the old village and is shown in the fourth picture below. The church itself is Grade I listed early medieval, known as St James, but officially "St James without (i.e. outside) the priory gate". The Defence College of Policing and Guarding is situated at nearby Southwick Park. As of 16 October 2011 the FirstGroup bus services providing travel to the village residents has been withdrawn. The only shop within the village is located opposite the church and is known as Southwick Village Stores.

All content from Kiddle encyclopedia articles (including the article images and facts) can be freely used under Attribution-ShareAlike license, unless stated otherwise. Cite this article:
Southwick, Hampshire Facts for Kids. Kiddle Encyclopedia.