Havant ( HAV-ənt) is a town in the south-east corner of Hampshire, England between Portsmouth and Chichester. Its borough (population: 125,000) comprises the town (45,826) and its suburbs including the resort of Hayling Island as well as Rowland's Castle, the larger town of Waterlooville and Langstone Harbour. Housing and population more than doubled in the 20 years following World War II, a period of major conversion of land from agriculture and woodland to housing across the region following the incendiary bombing of Portsmouth and the Blitz.

The old centre of the town was a small Celtic settlement before Roman times and the town's commerce, retired and commuter population swelled after World War II so as to be usually considered economically part of the Portsmouth conurbation.

The old centre of the town is on a classic crossroad configuration, with the four streets being named North Street, East Street, South Street and West Street, and St Faith's Church at the crossing. One axis is a known Roman road and a few artefacts along the route point to the other also being so.

There are several natural springs in the area, including one a short distance south-west of the church on West Street at the end of Homewell. This used to be the home of the premier parchment making facility in Southern England (closing in 1936) which later became a glove making factory and leather processing plant. The Treaty of Versailles was written on Havant parchment.

The town's commerce, retired and commuter population swelled after World War II so as to be usually considered economically part of the Portsmouth conurbation, its part closest to the Brighton-Worthing-Littlehampton conurbation, as at the 2011 census, in population, within the 20 largest conurbations in the UK.

The main shopping centre is called Meridian Shopping (formerly known as the Meridian Centre), as well as a pedestrianised section of West Street. The old town hall now houses the Spring Arts and Heritage Centre (formerly known as Havant Arts Centre). Havant is home to the local community radio station, Angel Radio which specialises in music of the pre-'60s era. 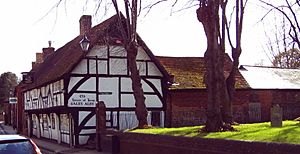 The Old House at Home. The raised grass to the right is part of St Faith's Church grounds, in the middle of town. 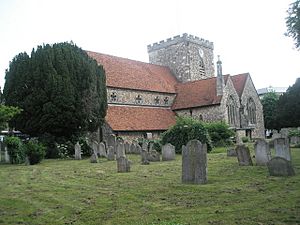 Archeological digs in the 19th and 20th centuries uncovered evidence of Roman buildings – near St Faith's Church and in Langstone Avenue, along with neolithic, mesolithic remains.

Havant was known around 935AD as 'Hamafunta' (the spring of Hama), referring to the spring to the south-west of St Faith's Churchyard and a settlement was made at the crossing point of tracks from the Downs to the coast and another east–west along the coast.

In 1086 (at the time of Domesday Book), Havant was a village with a population of around 100. In 1200, the monks of Winchester Cathedral were granted the right to hold a market at Haveunte. Around 1450 an annual fair was held.

For much of its history water played a vital part in local commerce, with many water mills, parchment manufacture and brewing.

Much of Havant was destroyed by fire in 1760, leaving only the church and the adjacent late 16th or early 17th century cottages. The cottages are now known collectively as "The Old House at Home", and are now used as a pub. It is claimed that the two main beams in the lounge bar were recovered from the Spanish Armada, and that the "Bear Post" within once had the last dancing bear in England tethered to it. The fire did allow widening of roads and the easier passage of stagecoaches through the town: the Bear Hotel and Dolphin Hotel were notable coaching inns. In the early hours of 25 October 1784 Havant suffered a minor earthquake, and a similar event occurred on 30 November 1811.

A grade II-listed house, larger than the rest in the four main streets, is Hall Place on South Street. It was rebuilt in 1796 by John Butler, replacing a seventeenth-century house that is reputed to have been built with stone from the slighted Warblington Castle. The 'new' classically Georgian house, of buff colour bricks from Dorset, passed in the 1820s into the ownership of Mr Charles Beare Longcroft, solicitor of established civic fame, whose wife's grandfather, John Cressweller (or Crassweller), had purchased the house from John Butler in 1803 and whose family parted with it in the middle of the 20th century.

Early English in style, the oldest undisturbed parts of the Church of St Faith, such as the chancel, date from the early 13th century. Some of the foundations however are believed to date from Roman times. The vestry is 14th century and there is a brass to William Aylward, 1413.

By 1768 Havant had its first postmaster trading from various offices until the present post office in East Street opened in 1936 (one of a handful in the UK with the cypher of brief King Edward VIII above the entrance). In 1976 a Royal Mail Christmas stamp was an angel design from a medieval embroidery in the Victoria and Albert Museum owned by the Victorian-established Catholic Mission in the Brockhampton neighbourhood.

In 1847 Havant became connected by railway to Portsmouth and to Brighton via Chichester and this was followed by the Portsmouth Direct Line to London in 1859. The branch line to Hayling Island ran from 1867 until the mid-1960s rationalisation. Havant Junction is significant on the South Coastway line.

The first hospital in the town opened in 1894 in Potash Terrace as a fever hospital, closing in 1939. A war memorial hospital opened in 1929 in Crossway; in 1935 a fine frieze of Wedgwood tiles depicting nursery rhymes was added to the children's ward.

The resident population rose in 'Havant and Waterloo Urban District' from 26,367 in 1939 to 74,552 for this direct predecessor to the borough in 1961. The rate of population increase has decreased since 1961 but population has approximately doubled in the fifty years to 2011, with fewer cultivated land or forest-consuming housing schemes and little non-hillside or direct coastal land available for development.

The right to buy has transformed the Barncroft ward into one of a blend of social and non-social housing close to the regional average. The other wards of Havant continue to demonstrate a high degree of homogeneity in terms of housing type, though there has been a slow increase in shared ownership with the local authority properties constructed since 2000.

The town's commerce, retired and commuter population swelled after World War II so as to be usually considered economically part of the Portsmouth conurbation, its part closest to the Brighton-Worthing-Littlehampton conurbation, as at the 2011 census, in population, within the 20 largest conurbations in the UK.

The main shopping centre is called Meridian Shopping (formerly known as the Meridian Centre), as well as a pedestrianised section of West Street. The old town hall now houses The Spring Arts & Heritage Centre (formerly known as Havant Arts Centre). Havant is home to the local community radio station, Angel Radio which specialises in music of the pre-1960s era.

Although there had been private schools before, it was not until the 1870 Education Act that Havant gained its first state schools – one in Brockhampton Lane, followed by one in West Street and then in Fairfield Road.

In 2017 Havant College was merged with South downs college. 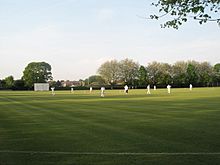 The town's senior non-league football side is Havant & Waterlooville F.C., On 16 January 2008 they reached the fourth round of the FA Cup for the first time in their history, beating Swansea City 4-2 in a third-round replay, setting up a 4th round match against Liverpool at Anfield, which they went on to lose 5–2 despite having led twice in the first half. The town is represented by Havant RFC (founded 1951) for rugby and Havant HC (founded 1905) are three times winners of the English Hockey League. The latter contributed several players to the British Olympic gold medal winning side of 1988. Havant Hockey Club also contributed two players to the 2006 Commonwealth Games in Melbourne. The astroturf was provided by the National Lottery Fund. The town has a successful amateur cricket club (founded 1876), which has attracted a number of first-class cricketers. Havant Cricket Club have won the Southern Premier Cricket League in 2000, 2002, 2007, 2008 and most recently 2009. In 2005 Havant Cricket Club reached the semi-finals of the Cockspur Cup.

Havant is also home to a notable rifle and pistol club. This club was the training venue for a member named Malcolm Cooper who won Olympic Gold at the 1984 Los Angeles Games and the 1988 Seoul Games, a feat not yet matched or beaten.

All content from Kiddle encyclopedia articles (including the article images and facts) can be freely used under Attribution-ShareAlike license, unless stated otherwise. Cite this article:
Havant Facts for Kids. Kiddle Encyclopedia.