Spotted Lake is richly concentrated with various minerals. It contains dense deposits of magnesium sulfate, calcium and sodium sulphates. It also contains high concentrations of eight other minerals and lower amounts of silver and titanium.

Most of the water in the lake evaporates over the summer, revealing colourful mineral deposits. Large “spots” on the lake appear and are colored according to the mineral composition and seasonal amount of precipitation. Magnesium sulfate, which crystallizes in the summer, is a major contributor to spot colour. In the summer, remaining minerals in the lake harden to form natural “walkways” around and between the spots.

Originally known to the First Nations of the Okanagan Valley as Kliluk, Spotted Lake was for centuries and remains revered as a sacred site thought to provide therapeutic waters. During World War I, the minerals of Spotted Lake were used in manufacturing ammunition.

Later, the area came under the control of the Ernest Smith Family for a term of about 40 years. In 1979, Smith attempted to create interest in a spa at the lake. The First Nations responded with an effort to buy the lake, then in October 2001, struck a deal by purchasing 22 hectares of land for a total of $720,000, and contributed about 20% of the cost. The Indian Affairs Department paid the remainder. 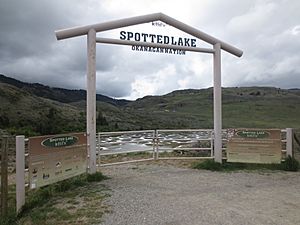 Gateway to Ktlil'x (Spotted Lake), a traditional medicine lake for the Syilx people

Today, there is a roadside sign telling visitors that the lake is a cultural and ecologically sensitive area, and a traditional medicine lake for the Okanagan Syilx people. The lake can be viewed from the fence that has been erected for protection from the liabilities of public access. Many travelers stop to view the site.

All content from Kiddle encyclopedia articles (including the article images and facts) can be freely used under Attribution-ShareAlike license, unless stated otherwise. Cite this article:
Spotted Lake Facts for Kids. Kiddle Encyclopedia.