The form that breeds on Socorro Island is much smaller than other rufous-sided towhees, and has gray upperparts. It is sometimes split as the Socorro towhee (Pipilo socorroensis). 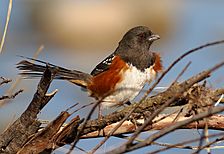 Adult males have a generally darker head, upper body and tail with a white belly, rufous sides, white spots on their back and white wing bars. Females look similar but are dark brown and grey instead of black. The spotted towhee has white spots on its primary and secondary feathers; the Eastern towhee is the same bird in terms of its size and structure but does not have white spots.

The spotted towhee lives in dry upland forests and breeds across north-western North America. It is present in California, Nevada, Arizona, Utah, Oregon, Washington, Idaho, and southern British Columbia year round. It is not found in arid climates and as a result does not reside in the Sonoran Desert, but resides in northern Arizona and the entirety of California except the southeast corner that borders Arizona. It has also been known to expand as far eastward as western Iowa and southwestern Minnesota. They also occur in fringe wetland forests and riparian forests near the border of upland forests. Because spotted towhees' habitat overlaps with areas of the United States that experience regular forest fires (Arizona, New Mexico, California), they tend to be found in unburned chaparral and avoid chaparral and forests which have been burned due to lack of ground cover and minimal foraging ability. Spotted towhees will be present in an area that is recovering after a burn (less than 15 years old), due to excellent ground cover and ease of ground foraging from the recovering understory vegetation, although populations will decrease after a forest fire until the vegetation has grown back.

Its breeding habitat in the southwest is largely dependent on Coastal sage scrub, as it provides cover from predators. They migrate to northern and northwestern United States and southwestern Canada to breed in scrubland, parks and suburban gardens. On the coast, it is much more common in the Coastal Douglas-fir present in Wyoming, Montana Idaho and British Columbia. Northwestern birds migrate eastwards to the central plains of the United States, mostly the northwestern-central Great Plains. In other areas, some birds may move to lower elevations in the winter. Their breeding habitat is chaparral, thickets or shrubby areas across western North America. This bird interbreeds with the collared towhee where their ranges overlap in southwestern Mexico. 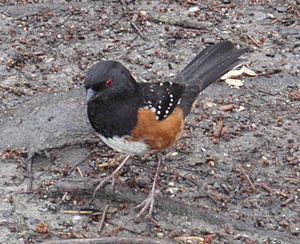 Spotted towhees forage on the ground or in low vegetation.

They nest either on the ground or low in bushes, seldom more than 1.5 m (4.9 ft) above the ground and most nests are around 40 cm (1.3 ft) above the ground. The location for the nests is usually found in exposed areas, but conceal the nest as it is being built. The female builds the nest over a period of about five days. It is bulky and sturdily made of leaves, strips of bark, twigs, forb stalks, and grasses, lined with pine needles, shredded bark, grass, and sometimes hair. It is usually 4.5 in (11 cm) in diameter with an inner ring of 2.5 in (6.4 cm) to 4 in (10 cm). The nests are built so the rim is at ground level and the nest is 2.5 in (6.4 cm) deep.

These birds forage on the ground or in low vegetation, with a habit of noisily rummaging through dry leaves searching for food. During the breeding season (spring and summer) they mainly eat insects, ground dwelling beetles, spiders and other arthropods that reside in the leaf litter that is foraged by the spotted towhee. They only eat protein rich food in the breeding season, and in the fall and winter they focus on foraging for acorns, seeds oats and berries. They will frequent bird feeders if present in their woodland habitat.

All content from Kiddle encyclopedia articles (including the article images and facts) can be freely used under Attribution-ShareAlike license, unless stated otherwise. Cite this article:
Spotted towhee Facts for Kids. Kiddle Encyclopedia.