Springfield Central is a designated business district and suburb in the City of Ipswich, Queensland, Australia. At the 2011 Australian Census the suburb recorded a population of 105.

The Centenary Highway forms the northern boundary of the suburb. Despite its name, the Springfield Central railway station is immediately to the north of the highway and hence in the neighbouring suburb of Brookwater.

The Robelle Domain is a 487 hectares (1,200 acres) parkland in the northern half of Springfield Central incorporating artificial lakes and waterways, landscaped gardens and cycle and pedestrian paths. 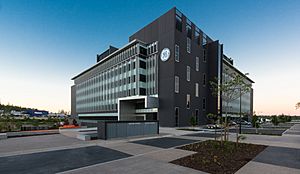 All content from Kiddle encyclopedia articles (including the article images and facts) can be freely used under Attribution-ShareAlike license, unless stated otherwise. Cite this article:
Springfield Central, Queensland Facts for Kids. Kiddle Encyclopedia.