St. Mary's Preparatory is a Catholic secondary school for boys in the Detroit suburb of Orchard Lake Village, Michigan.

St. Mary's was founded in 1885 on Detroit's east side on the corner of Forest and St. Aubin by Rev. Joseph Dabrowski as a school for Polish-American boys to train for the priesthood. The school moved to the 125 acre (0.5 km²) campus of the former Michigan Military Academy on the shores of Orchard Lake in 1909 and is still there today. St. Mary's now offers a college preparatory education. The campus is shared with SS. Cyril and Methodius Seminary and contains some offices and classrooms for Madonna University of Livonia, Michigan. The Felician Sisters from Livonia, Michigan have served the Orchard Lake Schools since 1935.

St. Mary's academic program is designed to meet the basic entrance requirements for any college curriculum. Requirements for graduation are: four years of theology and English; four years of mathematics three years of science and social studies; three years of foreign language; and a semester each of computer programming, computer applications, physical education, health, fine arts, and speech. Students are required to fulfill 28 credits for graduation.

Although students need not be Catholic to attend St. Mary's, all students are educated in the Catholic tradition. This tradition includes four years of theology in the classroom as well as attendance at Mass twice weekly. Class retreats and other activities are available for students. The school chaplain and many campus priests can guide students regarding their individual programs.

100 percent of St. Mary's graduates who apply to college have been accepted. A full-time guidance counselor assists students in selecting colleges and universities. The school held the national record for most students from one year to go to the U.S. Naval Academy (4). 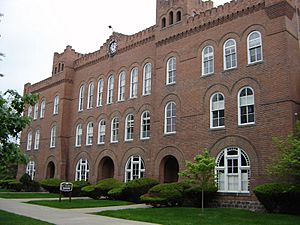 The "Prep Building" is the main school building of St. Mary's Preparatory. Formerly the Academic Building of Michigan Military Academy, it is now home to many administrative offices, one student lounge, thirteen classrooms, and two computer labs.

St. Mary's Preparatory is fully accredited and licensed by the State of Michigan's Department of Education, the Michigan Non-Public Schools Accrediting Association (MNSAA), and is a member of the Orchard Lake Schools, the Archdiocese of Detroit, the Detroit Catholic League, the Oakland Schools Consortium, and the Michigan High School Athletic Association.

Campus buildings include a hockey arena, volume library, a Marian grotto, a three-story residence hall, a bookstore, two gymnasiums, a science center, administration buildings, a laboratory and science building, a dining hall and the Shrine Chapel. It has a quarter of a mile of beach on Orchard Lake open only to members of the school.

About 90% of the school participates in sports. The school offers 14 varsity sports: football, basketball, baseball, bowling, track and field, cross country, golf, wrestling, rowing, hockey, soccer, lacrosse, skiing, and snowboarding. The Eaglets have won many league, district, and regional titles in its history. As of 2019[update] it had 41 Michigan State Championships. In 1998 the school's rowing team placed second in the Henley Royal Regatta. The Eaglet football team reached the state finals fourteen times, winning eight times.

The athletic facilities include an athletic center with a hockey arena, a weight room, an indoor track, locker rooms, a banquet hall, and a basketball gymnasium. The crew team has its own boathouse just off Orchard Lake. Outdoors, St. Mary's has two football fields, two baseball diamonds, and a basketball court. The St. Mary's Ski team practices at Alpine Valley Snow Ski Area in White Lake, Michigan.

The Eaglets compete in the MHSAA Division I (ice hockey), II, and III, depending on the sport. In the Detroit Catholic League, they compete in the Central Division. St. Mary's fiercest rivals are De La Salle Collegiate High School, Birmingham Brother Rice, U of D Jesuit, and Catholic Central High School.

St. Mary's holds the largest high school fair in the country every year for fund-raising attracting thousands of people (http://www.stmaryspolishcountryfair.com/).

The Galeria and museums area open for tours on Polish Sundays, the first Sunday of the month.

There are seven-day and five-day boarding students.

All content from Kiddle encyclopedia articles (including the article images and facts) can be freely used under Attribution-ShareAlike license, unless stated otherwise. Cite this article:
St. Mary's Preparatory Facts for Kids. Kiddle Encyclopedia.